No, it is not legal to euthanize children in Canada

Several online sources claim that euthanasia has been legalized in Canada for disabled, sick, or dying children. This is false; medical assistance in dying (MAID) was legalized in Quebec in 2014 and in the rest of Canada in 2016, but access is heavily restricted and Canadians under the age of 18 are not allowed to receive it.

“Canada legalizes euthanasia so parents can kill disabled children,” is the latest of several sensational headlines reporting nonexistent changes to the Canadian legal framework for medical assistance in dying. 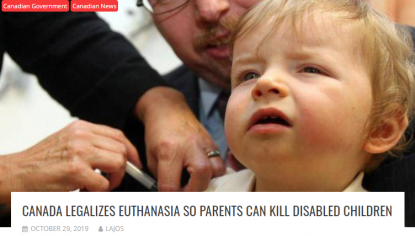 Screenshot taken on October 30, 2019 of a false article by the Native Born Canadian Movement

The false headline on MAID was most recently published by the Native Born Canadian Movement, a false news website based in Western Canada. The source of the misinformation can be traced to a 2017 article on Life Site News, a website originally founded by a Canadian national pro-life organization.

Life Site News correctly reported that, following the legalization of MAID, some Canadian parents began to enquire about the possibility of using the procedure for their terminally ill children, citing a 2017 report from the Canadian Pediatrics Society.

But a series of articles that followed have pushed the false idea that the law allows for parents to kill their sick children.

Following a 2015 ruling from the Supreme Court of Canada, the Canadian federal criminal code was amended in June 2016 to legalize MAID throughout the country. MAID was already legal in Quebec under different terms in June 2014.

The current law requires patients requesting MAID to meet several criteria, including being “at least 18 years old and mentally competent.”

Another criteria requires patients to have a grievous and irremediable condition, which is defined as “a point where natural death has become reasonably foreseeable.”

Access to MAID in Canada could be expanded. In December 2018, a commission of experts mandated by the Liberal government presented a report on the matter, including for mature minors, or individuals below 18 with the capacity to make an informed healthcare decision. The report did not make any recommendations and was meant to guide the debate on end-of-life practices.

In September 2019, a verdict by Quebec’s Superior Court declared that the imminent death component of the Quebec and federal laws on MAID were unconstitutional.

On the campaign trail, Prime Minister Justin Trudeau said that his government would amend the current legislation on MAID, without providing details.

MAID in Canada has been heavily monitored since it was legalized in 2016. The fourth interim report on MAID in Canada said there were 6,749 medically assisted deaths in the country between legalization and October 31, 2018.

Nigeria’s army has been stepping up ID checks and troop deployments, but says you should ignore this ‘fake’ security alert