No, an Indonesian talk show did not hold a survey showing Prabowo Subianto as the most popular choice for president

An article says a popular Indonesian talk show held a Facebook poll on upcoming presidential elections and found incumbent Joko Widodo trailing challenger Prabowo Subianto in support. The talk show says it does not hold Facebook polls and is not affiliated with the Facebook page on which news of the alleged survey was posted.

The article says that 85 percent of respondents favored the Subianto-Uno pair and the other 15 percent chose the Widodo-Amin ticket.

Mata Najwa digital team member Susangga, who like many Indonesians goes by one name, told AFP that the talk show has not carried out a survey on Indonesia’s upcoming presidential election.

“It’s not,” Susangga replied via WhatsApp message when asked whether the Facebook poll was carried out by the talk show.

He said the Mata Najwa Trans7 page did not belong to the talk show.

The “Mata Najwa Trans7” Facebook page that reportedly posted the results of the false survey was no longer available on August 29.

Widodo has been the front runner for the elections by a considerable margin in many recent polls, including this May survey by Indo Barometer, a Jakarta-based pollster.

The nusanews.id post that reported on the false survey has been shared on Facebook to more than 2.7 million people, according to data from social media monitoring tool CrowdTangle. 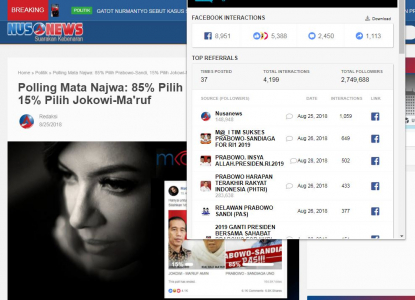