No, Indonesia has not been chosen to host the 2032 Olympics

A Facebook post says Indonesia will host the Summer Olympics in 2032. The country’s president has said Indonesia will bid for the world’s biggest multi-sport event, but the host of the 2032 Games has not yet been selected.

The Indonesian Facebook post, dated September 2, 2018, has a headline that translates as: “Indonesia is the host of the 2032 Olympic Games.” 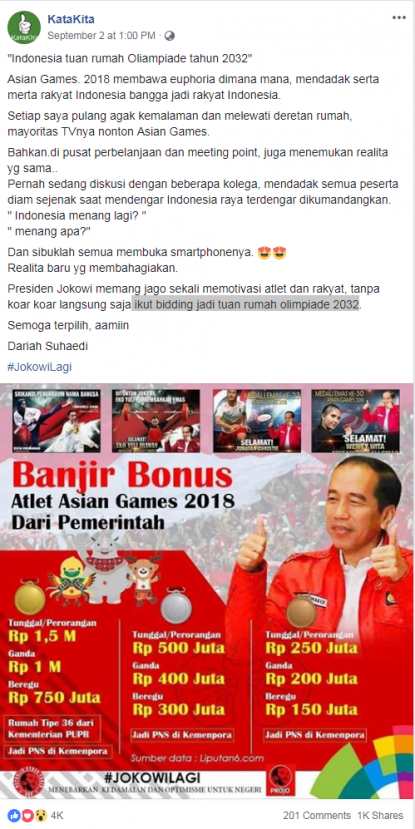 The post was shared to KataKita, an Indonesian Facebook group with more than one million followers. It includes some details unrelated to the headline, including how Indonesia’s successful hosting of the recently ended Asian Games boosted national pride.

It also displays an image of Indonesian President Joko Widodo and the amount of government-issued bonuses given to Indonesian athletes who medalled at the Asian Games.

A host for the 2032 Olympics has not yet been chosen.

The International Olympic Committee (IOC) has only announced host cities for the Summer Games through 2028, according to its website.

Widodo said that Indonesia will register itself as a candidate for hosting the 2032 Olympics, AFP reported.

"Indonesia has planned to immediately register itself as a candidate for the 2032 Olympics host," Widodo said in a televised statement.

"With our experience in hosting this 18th Asian Games we, Indonesia, believe that we can and are capable to be a host for bigger events.”

The misleading Facebook post was shared more than 1,000 times and attracted more than 4,000 interactions in the first four days after it was posted.