No, this image has been manipulated to include an offensive slogan

An image appearing to show UK Prime Minister Boris Johnson conducting a television interview in front of a periodic table of elements arranged to spell “Fuck Boris” has been shared hundreds of times on Facebook. However, the image has been manipulated; video of the interview, published by many UK-based news outlets, show that Johnson conducted the interview in front of a different backdrop that did not contain the profanity.

The image was published here on a Facebook page with more than 4,300 followers on September 4, 2020. It has been shared more than 300 times. 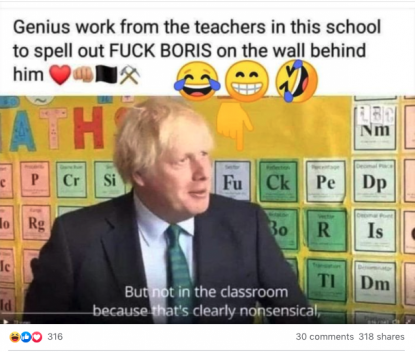 The text overlay above Johnson reads: “Genius work from the teachers in this school to spell out FUCK BORIS on the wall behind him.”

The image was also shared hundreds of times on Facebook here, here, and here.

However, this is not a genuine image; it has been manipulated to include the offensive slogan.

A keyword search found that the image is a screenshot taken from a press opportunity by Johnson at a school in Leicestershire on August 26, 2020, where he spoke about face masks in schools.

UK newspaper The Independent published a video of Johnson’s comments in this report published on the same day. 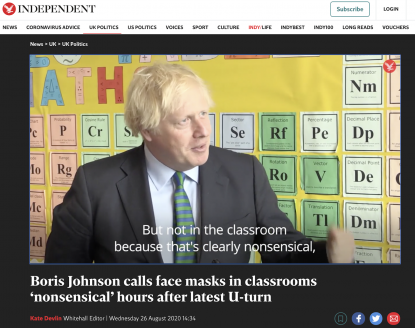 A screenshot of video published by The Independent on August 26, 2020

The video shows that Johnson is speaking in front of a different backdrop, where the elements are assembled in a different order and do not spell any words.

Below is a screenshot comparison between the video in The Independent’s report (L) and the misleading image (R):

The Independent’s report (L) and the misleading image (R

Johnson’s visit to the school was also reported on by other local news outlets, including Sky News here and The Daily Mail here. The video in both reports show that Johnson did not speak in front of a “Fuck Boris” backdrop.