No, this image does not show Turkish leader Erdogan declaring support for opposition candidates in Indonesia’s presidential election

An image that has been shared thousands of times on Facebook purports to show Turkish President Recep Tayyip Erdogan declaring his support for Indonesian presidential candidate pair Prabowo Subianto and Sandiaga Uno. The claim is false, the image has been doctored from an original photo of Uno on a plane.

This Facebook post, published March 28, 2019, and shared more than 9,400 times since, contains an image purporting to show Erdogan making a two-fingered pointing gesture, which in Indonesia is seen as a sign of support for Subianto and Uno.

Subianto is the sole challenger of incumbent President Joko Widodo in Indonesia’s April 17, 2019 election and Uno is his running mate. Here is the list of candidates on the website of the country’s General Elections Commission.

Translated to English, the post’s caption says in capital letters: “The world awaits Prabowo and Sandi!”, referring to the opposition candidates’ first names. 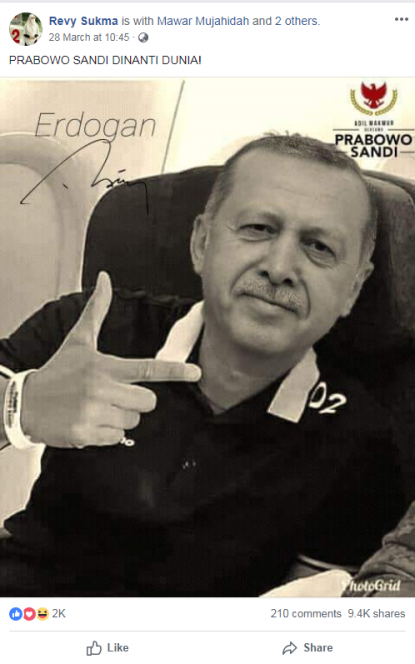 The mostly black-and-white image contains a logo in the top-right-hand corner with the names “Prabowo” and “Sandi” and a red bird – a symbol which also appears on the pair’s campaign website here.

There is also the word “Erdogan” and writing purporting to be the Turkish president’s signature in the top-left-hand corner of the image.

This January 17, 2019 report by Indonesian news outlet Bisnis.com is about the two-fingered pointing gesture made by Subianto and Uno during their campaign.

The image has been doctored; a Google reverse image search and further keyword searches led to this Instagram post published February 2, 2019 by Teuku Riefky Harsya, a member of  the Indonesian house of representatives.

The post, embedded below, contains a colour photograph of Uno and Harsya sitting next to each other on a plane and both making the two-finger pointing gesture with their right hand.

In the misleading image shared on Facebook, Erdogan’s face has been pasted on Uno’s body and the whole picture has been made black and white.

Corresponding features include Uno’s right hand with a white bangle on it, the distinctive light collar of his dark shirt with the number “02” on the shoulder, and the plane’s window. 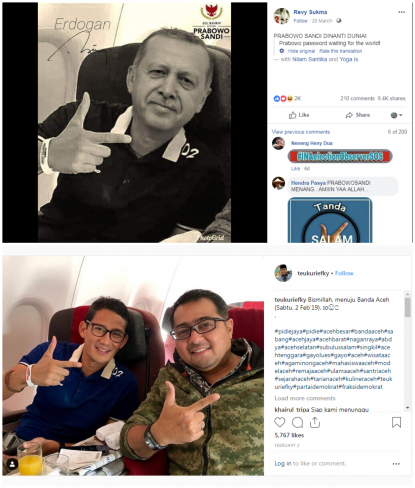 In the bottom-right-hand corner of the misleading image are the words “PhotoGrid”. A Google search reveals that this is a photo-editing app.

The PhotoGrid app’s description here on Google Play says: “Create fun, one-of-a-kind layouts by remixing your own photos and sharing them on social platform!”

A Google Images keyword search for “Erdogan” found the original picture of his face used in the misleading Facebook post. It appears in this profile of him published by Forbes magazine.

The picture of Erdogan has been cropped, rotated and made black-and-white, as can be seen in the image below comparing screenshots of the misleading post (L) and the Forbes article (R): 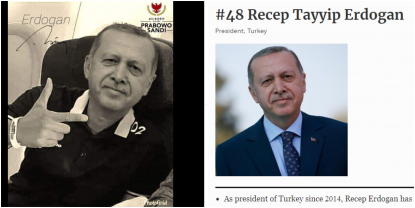 Some small tufts of Uno's hair can still be seen poking out behind Erdogan's head in the doctored image.

Indonesian news organisations have also published their own fact-checks on the misleading post, for example this Tempo report and this Liputan6 report.