No, this image does not show the results of Indonesia’s 2019 presidential election

An image has been shared thousands of times on Facebook alongside claims it shows the results of Indonesia’s 2019 elections with incumbent President Joko Widodo losing the popular vote. The claim is false; the image actually shows the official final tally of the country’s 2014 presidential election. 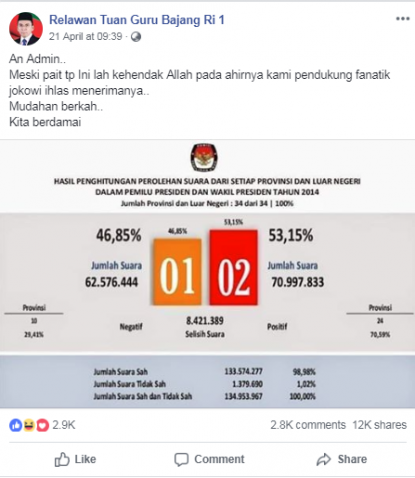 The misleading post’s translated caption reads: “An admin. Even though this fact is devastating, this is what Allah wants.. At the end, we, the fanatic supporters of Jokowi, have accepted the results. Hopefully this would bring joy. May peace prevails!”

But the picture does not show Indonesia’s 2019 polls results.

The translated headline of the bar chart depicted in the Facebook image reads: “RESULTS OF COUNTED VOTES FROM EVERY PROVINCE AND OVERSEAS IN THE 2014 PRESIDENTIAL AND VICE PRESIDENTIAL ELECTION”.

AFP typed the Indonesian-language headline into a Google keyword search and found the image was originally published in this July 22, 2014, post on the website of the general elections commission regional office in Indonesia’s Mandailing Natal regency.

The original post is headlined: “KPU announces results of the 2014 presidential and vice presidential election.”

The infographic is giving the results of the 2014 presidential election, which was also contested by Widodo and Subianto.

At that time, Widodo’s ballot number was “2” and Subianto’s “1”. Here is a 2014 report by Indonesian news portal Merdeka.com on the candidates and their ballot numbers.

This July 22, 2014, report by Indonesian news outlet Merdeka.com about Widodo’s victory in the election also has a screenshot of the identical image as seen in the regional KPU office website. 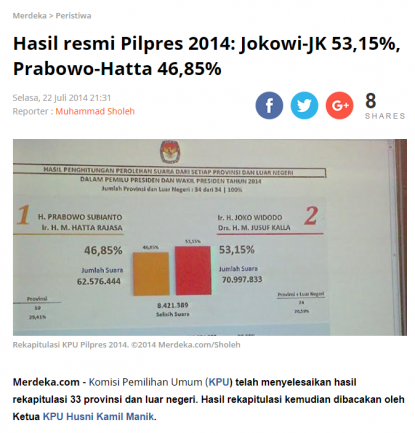 Screenshot of the Merdeka.com report showing the original 2014 results

Below is a side-by-side image comparing the Facebook image and the one obtained from the KPU regional office's website: 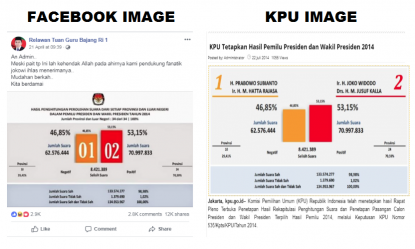 The misleading Facebook image has added the numbers "01" on the orange bar and "02" on the red bar, and removed the names of the presidential and vice presidential candidates from the original 2014 infographic.

According to the KPU's official schedule which can be seen here, the official vote count for the 2019 elections will only finish on May 22, 2019.

No, these are not coffins for Indian security forces killed in a Maoist attack in May 2019