No, this headline did not say Indonesian cinemagoers were disappointed by a new film about a jailed politician

Multiple Facebook posts shared a photograph of a newspaper headline, claiming it says cinemagoers are disappointed in a recently released movie about Jakarta’s jailed former governor. The image is manipulated. The original headline said the film was sold out.

The Facebook posts share an image of an article in a popular local newspaper, Warta Kota, in their November 9, 2018 edition with the headline: “People are disappointed because (his wife’s) seven years of cheating was cut from 'A Man Called Ahok'”.

The image has widely circulated on social media, for example, this Facebook post which has been shared more than 900 times since it first appeared on November 10. 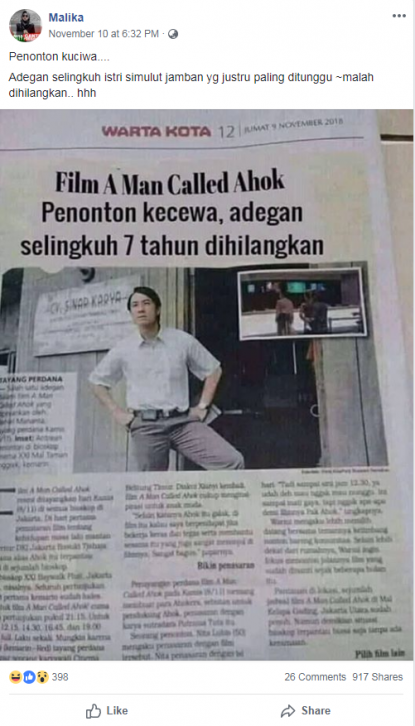 A Man Called Ahok is a film that was released in November which depicts the early life of former Jakarta governor Basuki Tjahaja Purnama -- better known as Ahok.

Once a popular politician, Ahok came under fire for comments he made about a verse in the Koran during his re-election campaign. He lost the race in 2017 to a challenger backed by Muslim hardliners calling for blasphemy charges to be laid against him. Ahok was subsequently charged, convicted and sentenced to jail.

He divorced his wife earlier this year, Ahok's lawyer was quoted as saying.

During the divorce proceedings in April, 2018, a judge told the Jakarta court that Purnama's wife had been cheating on him since 2010. Here is a report on the proceedings by state news agency Antara.

There is no mention of marital infidelity in the film, according to this interview with the filmmaker.

AFP found that Warta Kota did publish an article about the film in its November 9 edition, but with a different headline.

The original headline translates as: “Ahok’s Film Sold Out”.

Below is a photo of the original headline: 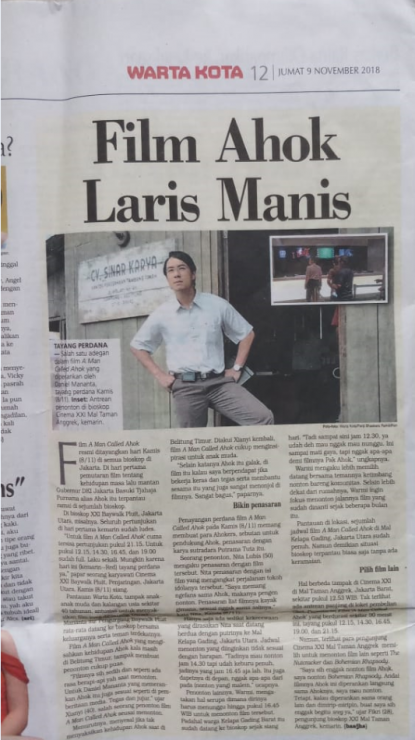 Snapshot of the original headline from Warta Kota.