No, this Filipino nurse was not sexually assaulted in Saudi Arabia

Multiple online reports claim that a male Filipino nurse was sexually assaulted in Saudi Arabia. The accounts are false, using stolen imagery and made up claims to lure people into clicking onto advertising.

The reports, such as this, touch on a sensitive issue for the Philippines because about 10 million of its nationals are deployed abroad as migrant workers.

The overseas workers provide a lifeline to the economy, but regularly report being abused by their employers. The false sexual abuse reports prey on those fears to lure people into clicking onto advertisements.

On Facebook, the fake sexual abuse reports are accompanied by the image below.

The headline, when translated to English, says: “Filipino nurse in Saudi in critical condition after he was raped by 5 Arab men". It then alleges he was also abused with a Coke bottle. 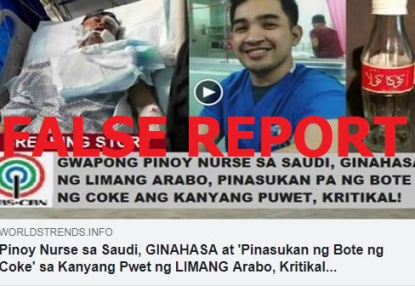 Clicking on the link leads to a website with the same headline.

Other websites with similar accounts, such as this, say the Filipino nurse died.

The accounts include an image of a bandaged man lying on a hospital bed.

However that picture is of another Filipino who was beaten in Riyadh. The original image was posted on a crowdfunding website for the victim before the fake news reports emerged.

The fake posts also include a picture of a man in hospital worker clothes.

He is John Paul “Jap” Nofuente,  a nurse who told AFP that he worked in the Philippines and had never been employed abroad nor travelled to Saudi Arabia.

Nofuente sent to AFP via Facebook messenger the original image that the fake news sites had used without his authorisation. The image sent to AFP is below. 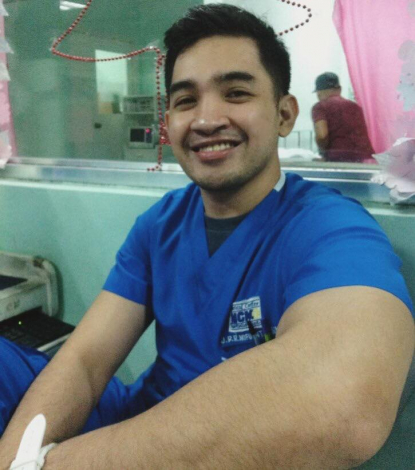 “No, I haven’t gone to Saudi,” Nofuente told AFP on August 7.

“Please don’t believe everything you read on social media. Kindly report the article if it appears on your timeline. Thank you,” he posted on Facebook on August 4.

The fake reports have been shared more than 45,000 times to Facebook pages with hundreds of thousands of followers.

They are clickbait leading to advertisements.

Below is a screenshot of one of the posts, which includes an invitation to click on a fake Facebook survey that leads to further advertisements. 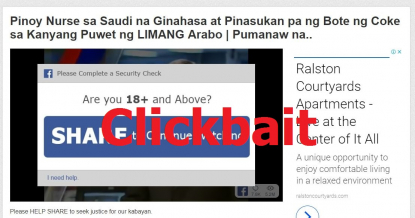