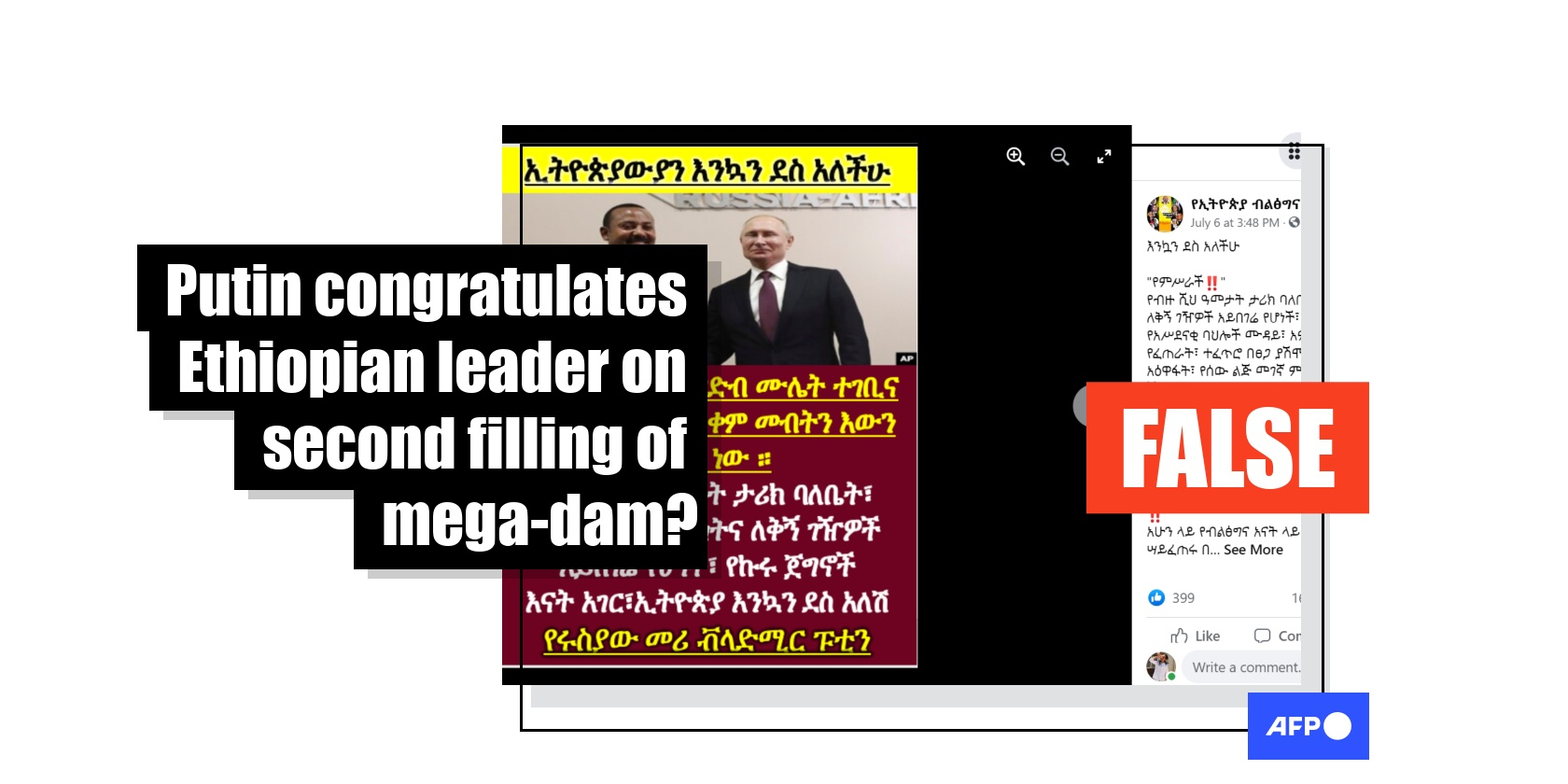 A Facebook post shared hundreds of times on Facebook claims that Russian President Vladimir Putin recently congratulated Ethiopia’s prime minister, Abiy Ahmed, on the second filling of the Grand Ethiopian Renaissance Dam (GERD). Ethiopia's construction of the mega-dam has been a source of diplomatic tension with its downstream neighbours. However, this is false; the Russian embassy in Addis Ababa told AFP Fact Check that Putin never made any such comments. Furthermore, there is no official evidence of the Russian head of state issuing a statement regarding the GERD filling.

The post, archived here, has been shared more than 350 times since it was published on Facebook on July 6, 2021.

It was shared from an account called “Ethiopian Prosperity Party”, the political party led by Ethiopian Prime Minister Abiy Ahmed. However, the page is not an official account and was created by a party supporter.

The post features an image of Putin and Abiy shaking hands.

“Congratulations Ethiopians! The second phase of the Abay dam filling is legitimate and demonstrates the right to use its own natural resources (sic),” reads a quote attributed to the Russian leader translated to English.

“A country that has many thousand years of history, an example of freedom that doesn’t bend to oppression, the mother of many proud heroes, congratulations Ethiopia,” it concludes.

The post surfaced after the onset of this year’s rainy season, which helped speed up the process of filling the mega-dam.

An official told AFP  on July 19, 2021, that Ethiopia had attained its second-year target for filling the mega-dam on the Blue Nile River. Ethiopia hit its first target of 4.9 billion cubic metres in July 2020.

Ethiopia, Sudan and Egypt have been locked in a tug of war over the use of the Nile ever since Ethiopia started building and filling the GERD using water from the river. Both the governments of Egypt and Sudan have expressed concern that diverting Nile water into the GERD will restrict water supplies in the two countries, affecting millions of people’s livelihoods.

However, the remarks attributed to Putin are fabricated.

Valentina Kim, a spokeswoman for the Russian embassy in Addis Ababa, said the leader had not congratulated Abiy.

When asked about the false claims, Kim said: “We have not seen them”.

“We cannot comment on an event [whose] existence is not proved,” she added.

According to the Kremlin’s website, the most recent conversation between both leaders was a phone conversation on April 7, 2020.