No, an entire cricket team was not bowled out for zero in an unprecedented match

An entire cricket team was bowled out for zero, according to posts on Facebook pages posing as state-run Pakistan Television (PTV) accounts. The scorecard and a photo of Indian captain Virat Kohli in the posts are misleading, and PTV says the pages are impostor sites.

The pages, including this one, show parts of a scorecard from a domestic cricket match in England in 2014 when the Wirral Cricket Club was bowled out for three runs.

An English translation of the Urdu post underneath the scorecard in the pages reads: “Unprecedented match in the history of cricket, the entire team was out for zero. Watch the video.”

Next to the scorecard is a photo of Kohli dressed in his Test uniform and wearing a helmet with his bat handle under his arm, giving the impression he has just been dismissed. 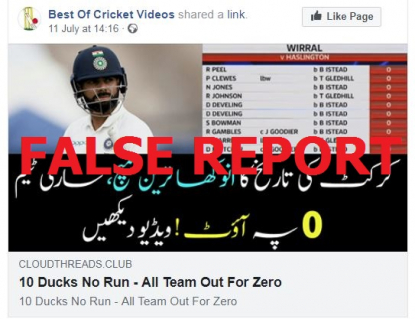 The reports attracted more than 2,500 reactions on Facebook in the first three days after they were posted in July 2018.

Clicking on what is purported to be the video in the posts does not lead viewers to footage of a cricket match, rather a series of advertisements.

The scorecard shown in the misleading reports shows the top 10 batsmen from the Wirral Cricket Club dismissed for zero, which is accurate.

However the portion of the scorecard showing the number 11 batsman scoring one run, and two leg byes, is cropped out.

Major international media reported on the 2014 match, showing the complete scorecard, including the BBC, Cricket Australia and Sky News.

The Wirral Cricket Club also posted a humorous tweet about the result at the time.

Kohli did not play in that match.

PTV also told AFP on July 14, 2018 the pages that carried the false reports were not run by the broadcaster.

“We don't have any Facebook page with the name of PTV Cricket,” Aly Naseer, an official from PTV's social media department, told AFP.

“It is a very big problem for us because we are state broadcasters. If you can help with this, it will be great.”

Naseer said PTV had reported the pages to Facebook.

Other posts on the impostor PTV pages, which claim to have more than 4.1 million followers, similarly use photos of cricket scenes to lure viewers into clicking onto other pages with advertisements.