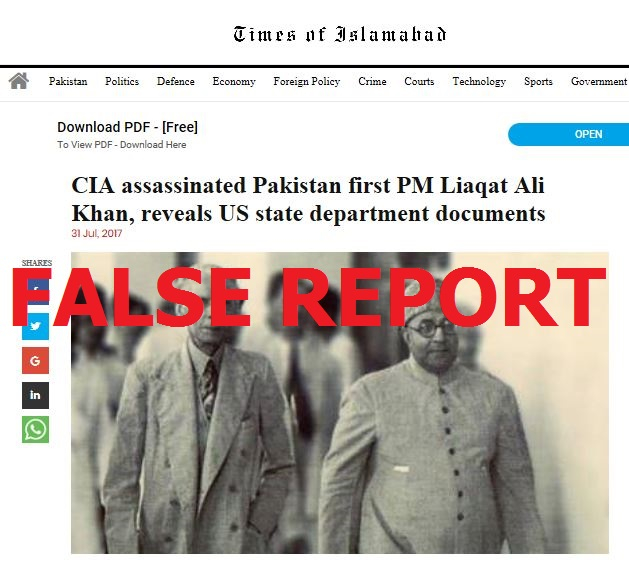 No, declassified US State Department documents do not show the CIA assassinated Pakistan’s first prime minister

An online portal says declassified US State Department documents show the Central Intelligence Agency (CIA) assassinated Pakistan’s first prime minister, Liaquat Ali Khan. There are no such records on the US Statement Department’s website of its declassified documents, and the portal relies on an unsubstantiated report from another website to base its claim.

Khan was shot dead in the garrison city of Rawalpindi as he addressed a rally on October 16, 1951.

The Times of Islamabad published its report  in July 2017, citing as its source a Pakistan Today report.

The Times of Islamabad says the US organised the murder of Khan due to his refusal to use his position to secure oil contracts in neighbouring Iran for American corporations.

“Quoting the declassified State Department documents, Pakistan Today reported on Friday that Khan was murdered because of his refusal to use his office for securing oil contracts in neighboring Iran for US corporations.”

- Excerpt from the Times of Islamabad report

The Pakistan Today report is not easily accessible online but an archived version of it can be found here.

The headline of that articles reads: “Secret is out: Americans murdered Liaquat Ali Khan!

The Pakistan Today report, from 2015, did not cite any specific US State Department documents.

The only further information it gave about the purported documents was the following sentence.

"It was revealed in the documents declassified a few years ago."

The US State Department has a website from which its declassified documents can be accessed.

A search for Liaquat Ali Khan and Liaqat Ali Khan on these websites does not come up with any results that would back the claims in the Times of Islamabad and the Pakistan Today reports.

The results of the searches on different libraries on the website are here, here, here and here.

Similar claims of purported declassified US State Department records showing the CIA killed Liaquat Ali Khan have been circulating online for more than a decade.

Many refer to this 2006 article by Arab News.

“A recent declassified document from the US State Department brings to light some interesting facts. According to the document, a telegram was sent by the American Embassy in New Delhi on Oct. 30, 1951”.

However the Arab News report says the telegram describes a newspaper article dated October 24, 1951, from an Indian newspaper called the “Nadeem”.

It says the Nadeem article makes the claim that the US was behind Khan’s death, and the telegram summarises the article, according to the Arab News report.

The Arab News report does not state the State Department telegram made any claims about CIA involvement directly. It only cited the Nadeem newspaper.

It is not clear if the telegram exists.

Even if it did, the citation of an Indian newspaper report speculating about events in Pakistan would not be be proof the CIA orchestrated the murder.

US embassies routinely send summaries of press reports in their countries that might help give insight into how Washington is perceived there.

The motives behind Khan’s assassination have never been fully explained, according to this research paper by the National Institute of Historical & Cultural Research.

The assassin, later identified as Afghan national Said Akbar, was killed on the spot, and while an inquiry hinted at a conspiracy to change the government, it was never made clear who was behind it.

The Times of Islamabad report has been shared to more than 20 million people on Facebook, according to date from social media monitoring company Crowdtangle. 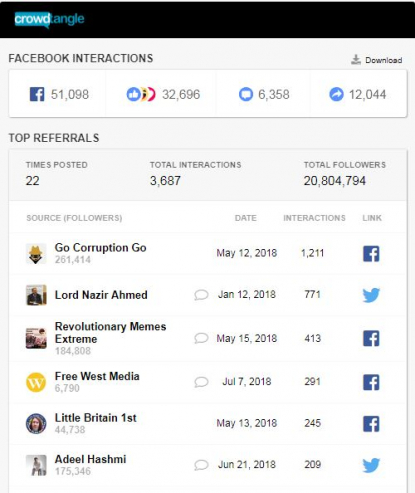