No, Britain’s Queen Elizabeth did not mention the Philippines in her speech on the novel coronavirus

A graphic has been shared hundreds of times in multiple posts on Facebook and Twitter alongside a claim that it contains a quote from Britain’s Queen Elizabeth in which she praises Philippine President Rodrigo Duterte for his efforts to curb the novel coronavirus pandemic. The posts allege that the Queen made the remarks during her televised speech on April 6, 2020. However, the claim is false; Duterte was not mentioned in the Queen’s address and the image has been doctored from another graphic that contains a genuine quote by the Queen. 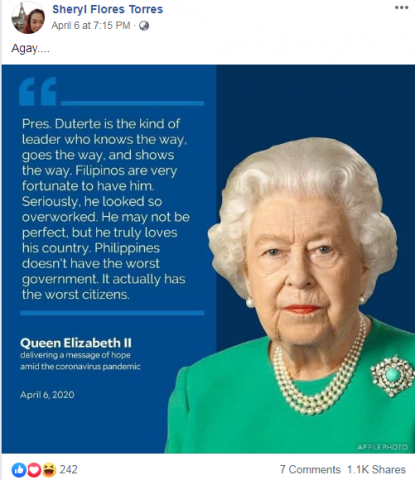 The quote in the graphic reads: “Pres. Duterte is the kind of leader who knows the way, goes the way, and shows the way. Filipinos are very fortunate to have him. Seriously, he looked so overworked. He may not be perfect, but he truly loves his country. Philippines doesn’t have the worst government. It actually has the worst citizens. / Queen Elizabeth II / delivering a message of hope amid the coronavirus pandemic / April 6, 2020”.

The post’s Visayan-language caption translates to English as: “Ouch….”

Queen Elizabeth made a rare televised address on April 6, 2020, thanking healthcare workers and urging a “collective effort and common endeavour”. Here is an AFP report on the speech.

A transcript of the Queen’s speech released on the official website of the British Royal Family makes no reference to Duterte or the Philippines.

The graphic shared in the misleading posts was manipulated from another quote graphic published by Inquirer.net, a Philippine media site.

Inquirer.net published a side-by-side comparison of the doctored graphic and its original quote card here on its Facebook page on April 7, 2020, warning its readers to "beware of edited images".

The post's caption reads: “After INQUIRER.net shared on social media an excerpt from Queen Elizabeth II’s Sunday address to the United Kingdom, the same post was manipulated to say that Duterte looked 'overworked' and that the 'Philippines doesn’t have the worst government, it actually has the worst citizens.'"