Skip to main content
People wait in a queue to collect free rations outside a government store during a nationwide lockdown imposed as a preventive measure against the spread of the COVID-19 coronavirus in Allahabad, India on April 15, 2020. (AFP / Sanjay Kanojia)

A claim has been shared repeatedly in multiple Facebook, WhatsApp and Twitter posts that the Indian government has outlawed social media posts about the novel coronavirus pandemic through a piece of national legislation called the Disaster Management Act. The claim is false; Indian officials said the posts were “misleading and false”; AFP found two of the purported sections of the law cited in the misleading posts do not exist under the act and the other does not mention a social media ban related to COVID-19 content. 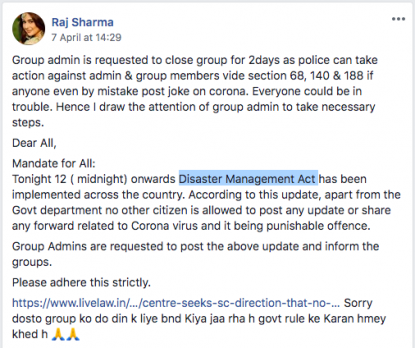 The post states, in part: “Group admin is requested to close group for 2days as police can take action against admin & group members vide section 68, 140 & 188 if anyone even by mistake post joke on corona.”

“Mandate for All: Tonight 12 ( midnight) onwards Disaster Management Act has been implemented across the country. According to this update, apart from the Govt department no other citizen is allowed to post any update or share any forward related to Corona virus and it being punishable offence… https://www.livelaw.in/…/centre-seeks-sc-direction-that-no-”

As of April 14, 2020, COVID-19 has killed at least 117,000 people and infected more than 1.8 million others, according to this report published by World Health Organization (WHO).

In response, India imposed a nationwide lockdown on March 24, 2020 in a bid to curb the growing COVID-19 epidemic. Here is an AFP report on the government announcement.

The claim is false. India's Ministry of Home Affairs invoked the Disaster Management Act, as seen in this statement, as it imposed the 21-day lockdown.

Screenshot of the government's statement

Below is a screenshot of section 68 of the act in the government release:

AFP also found that the Live Law report mentioned in the misleading post does not mention an immediate ban on social media posts.

It instead discusses how the Indian Supreme Court denied the Indian home secretary’s request to “issue a direction” that would require “electronic/print media/web portal or social media” to first seek “the true factual position from the Central government” before publishing anything about COVID-19. The Court responded it "does not intend to interfere with the free discussion about the pandemic", but did "direct the media to refer to and publish the official version".

On April 6, 2020, a spokesperson for Live Law posted on Twitter that the claims were “fake” and published its own debunk here.

A similar misleading claim that circulated in India about social media posts during the COVID-19 pandemic was previously debunked by AFP here.

Read this report to know more about it

Msgs circulating on social media claiming-apart from Govt no citizen is allowed to post/forward update on #COVID19- is MISLEADING&FALSE#PIBFACTCHECK: Circulating unverified/false news leading to panic is prohibited. As responsible Citizens let's not circulate fake forwards (1/3) pic.twitter.com/JvPPzd25DR