A video that shows an argument between shoppers at an Australian department store has been viewed tens of thousands of times in Facebook and Twitter posts alongside a claim that Chinese nationals have been banned from supermarkets in Australia. The claim is false; major Australian supermarket chains told AFP there was no policy that bans Chinese people from their stores as of April 2020; the video in the misleading posts has circulated in media reports about a dispute in an Australian supermarket over baby formula.

The video was published on Twitter here on April 14. It has been viewed more than 24,000 times.

The 42-second video shows an altercation between an Asian couple and a Caucasian man at a branch of Big W, an Australian department store.

The tweet's caption states in part: “Chinese not allowed in Supermarkets in Australia So it’s started”. 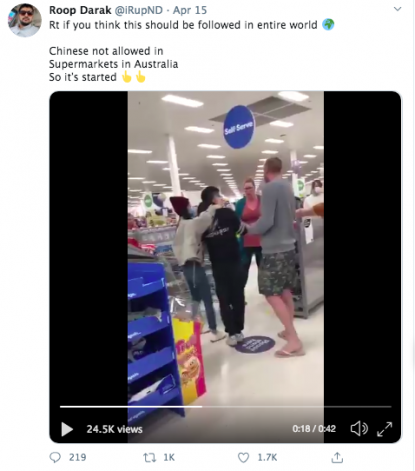 The clip circulated online as scenes of panic buying were reported in Australia during the novel coronavirus pandemic, which has killed more than 152,000 people and infected over 2.2 million others worldwide, according to the World Health Organization (WHO).

The claim is false; Australia’s major supermarket chains told AFP they have not banned Chinese nationals in their stores as of April 2020.

Woolworths Group, which owns supermarket chain Woolworths and department store Big W, declined to comment on the details of the incident seen in the video in the misleading posts. In an email to AFP on April 17, a spokesperson for the retail company said: “We welcome anyone who wishes to shop at our stores.”

A spokesperson for another major supermarket chain, Coles, told AFP via email on April 17: “It’s absolutely untrue. Coles has not banned Chinese customers.”

The video in the misleading posts has circulated in reports about a conflict between shoppers over baby formula at a Big W store in Melbourne, Australian TV service 7News reported here.

Below is a screenshot of the 7News report: 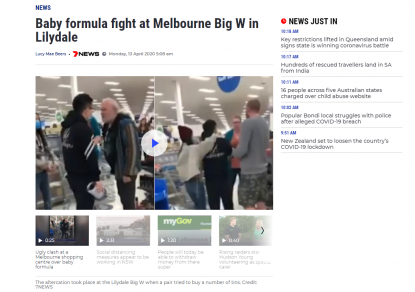 A screenshot of the 7News report

Bulk purchasing of baby formula for resale in China has prompted fears of a shortage in Australia since at least 2015, as reported here by AFP.

Woolworths has imposed a two-unit-per-transaction restriction on its customers, while Coles customers can purchase up to four tins of formula milk per transaction.

A keyword search on Google found an earlier version of the video published here on Facebook on April 10.

The footage, which has been viewed more than 1.7 million times as of April 17, is described in the post as being filmed at a Big W store. The caption states: "?Australia has had enough!? After being told they had been in already and bought 4 tins after being seen at another shopping centre they still had the nerve to fight for the 4 tins!! Kudos Rod for standing up and to the staff at Big W for kicking them out!"

The uploader commented on the Facebook post: “I filmed and uploaded this because we are all sick of not being able to purchase baby formula for our babies. I’m sick of hearing mums having to drive to multiple locations and visit different stores just to find formula. Especially when they should be in isolation like everyone else. What these people are doing is wrong and should be stopped. It should be illegal.” 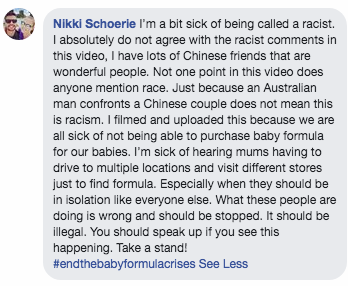