Skip to main content
In this file photo taken on January 12, 2021, US President Donald Trump walks to Marine One on the South Lawn of the White House in Washington, DC. (AFP / Brendan Smialowski)

A video viewed tens of thousands of times on Facebook, Twitter and YouTube purports to show a speech by outgoing US President Donald Trump after he was impeached for a second time on January 13, 2021. The claim is misleading: the video shows Trump speaking after he was acquitted in his first impeachment trial in February 2020.

The footage circulated after Trump became the first US president to be impeached for a second time, when a bipartisan majority in the House of Representatives voted to charge him with inciting a January 6 attack on the US Capitol.

Five people died in violent unrest that ensued when Trump supporters stormed the Capitol as legislators were certifying President-elect Joe Biden's victory in the November election. 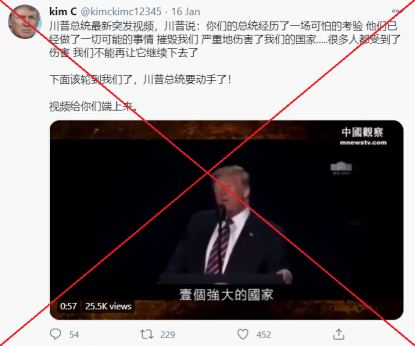 The same footage, along with similar claims that it shows Trump after his January impeachment, was also shared here on Facebook and here on YouTube.

“Everybody knows, my family, our great country, and your president, have been put through a terrible ordeal by some very dishonest and corrupt people,” Trump says in the video.

“They have done everything possible to destroy us, and by so doing, very badly hurt our nation. They know what they are doing is wrong, but they put themselves far ahead of our great country.”

Traditional Chinese characters are superimposed on the bottom side as a translation of Trump’s words.

After Trump’s statement, text appears reading “Now It’s OUR Turn” and “And The Gloves Are Off...”

The video features the logo and website address of the White House and the name and address of Chinese language website Observe China in the top-right corner.

Screenshot taken on January 20, 2021, of the Twitter video showing the logo and website address of the White House, and the name and address of Observe China

“In the newest video of President Trump, Trump said: Your President has been put through a terrible ordeal,” the tweet’s caption reads in Chinese. “They have done everything possible to destroy us, and by so doing, very badly hurt our nation.....So many people have been hurt, and we can’t let that go on. Now it's our turn, President Trump is about to do it! The video is here for you.”

A reverse image search on Russian search engine Yandex and a further keyword search found this YouTube video published by the White House on February 6, 2020.

Identical footage showing Trump’s remarks in misleading social media posts can be found at the 01:34 mark.

Below are two screenshot comparisons of the misleading Twitter video (L) and the YouTube footage published by the White House (R): 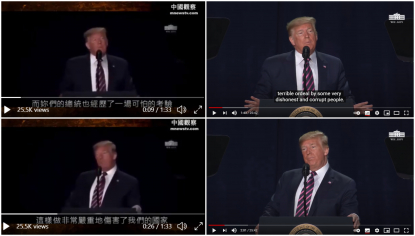 A transcript of Trump’s remarks at the February 6, 2020 event are published here on the official site of the White House. His comments came after a Senate vote cleared him of abusing his office and obstructing Congress.

Trump had been impeached in December 2019 on charges of abuse of power and obstruction of Congress for trying to coerce Ukraine into smearing his future Democratic rival Joe Biden. He was subsequently acquitted in his trial in the Republican-controlled Senate on February 5, 2020.

The same video was also reported such as here by US television station WLXT, and here by US newspaper The Washington Post.

The first impeachment to Trump was acquitted by the US Senate on February 6, 2020.