This December 3, 2020, post has an Indonesian-language caption that says: “IT’S OFFICIAL! INTERNATIONAL LAW HAS REMOVED CANNABIS FROM THE LIST OF NARCOTICS DRUGS!! To support the need of the medical industry, the UN voted to remove cannabis from the list of illegal drugs.” 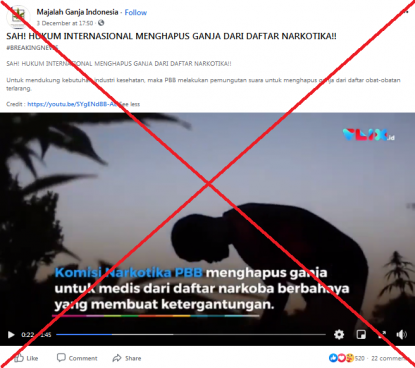 The post also included a video report with a logo from Indonesian news portal Viva.co.id.

Cannabis, however, is still retained in the list of internationally controlled narcotics drugs, as stated in this press release from CND on December 2, 2020.

The press statement partly says: “In January 2019, the World Health Organization (WHO) made a series of recommendations to change the scope of control of cannabis and cannabis-related substances. After intensive considerations (more information below), the Commission took action today on these recommendations.

The list of narcotics drugs internationally controlled under the 1961 Convention contains over 130 products, grouped in Schedule I to IV, with each of them having different degrees of control and levels of harmfulness.

The clip shared in the misleading post is a video report posted on the YouTube channel of Viva.co.id here. Translated from Indonesian to English, the title reads: “The UN No Longer Defines Marijuana as Dangerous Drugs”. The video report  matches the UN’s statement.

The video’s caption reads, in part: “The UN has finally defined cannabis or marijuana as not dangerous compared with other drugs like heroin. The UN drugs commission removes medical marijuana from the list of dangerous narcotics that can cause addiction… Nevertheless, the UN’s decision does not mean marijuana will be legalised.”