Multiple Facebook posts shared tens of thousands of times claim that Philippine President Rodrigo Duterte announced in his recent national address there would be “no classes for all in 2020-2021”. The claim is misleading; in his July 27, 2020, address, Duterte banned face-to-face teaching until a COVID-19 vaccine is created, but called for the implementation of online learning as a temporary measure. 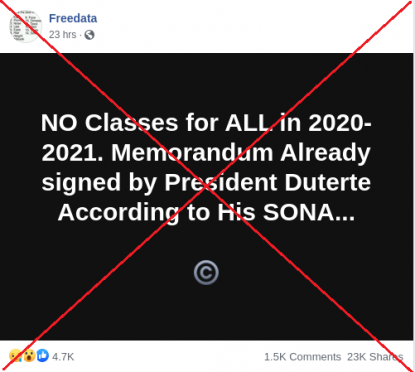 A screenshot of the misleading post taken on July 28, 2020

The post reads: “NO Classes for ALL in 2020-2021. Memorandum Already signed by President Duterte According to His SONA…”

SONA is an acronym for the “state of the nation address”, an annual speech delivered by the Philippine president to Congress that details the government’s agenda for the coming year. Duterte delivered his fifth SONA on July 27, 2020.

An identical claim about Duterte declaring there would be “no classes for all” until 2021 were also shared on Facebook here, here, here and here.

A review of Duterte’s SONA video shows that he made no such announcement. Instead, he said that traditional in-class learning would be banned, but stressed the government would provide alternative learning methods.

At the 50-minute 33-second mark of the official video, Duterte states: “Until the COVID-19 vaccine is available, I will not allow the traditional face-to-face teaching or learning unless the risk of exposure to the sickness are eliminated ... We must implement online learning, modular learning, and TV- and radio-based broadcast, which students coming from different backgrounds can avail. DepEd will provide the printed modules for those who cannot afford online learning.”