Skip to main content
A policeman stands guard in front of the US Consulate in Chengdu, southwestern China's Sichuan province on July 27, 2020. - Chinese authorities took over the United States consulate in Chengdu, the foreign ministry said, days after Beijing ordered it to close in retaliation for the shuttering of its mission in Houston. (AFP / Noel Celis)

A photo has been shared in multiple posts on Facebook, Twitter and Weibo alongside a claim it shows staff from the US consulate in China’s Chengdu "cheering for China" after Beijing closed its premises on July 24, 2020. The claim is false; a similar image of the same group of people was published in an online report in February 2020; the report stated the photo shows a gathering of United Airlines staff after its flights were suspended to parts of China due to the COVID-19 pandemic. 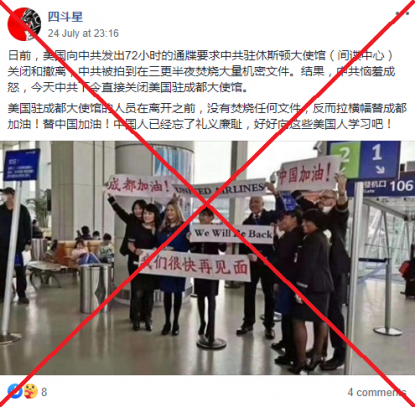 The photo shows a group of people holding banners in front of a boarding gate at an airport. The English banners read “United Airlines” and “We Will Be Back”, and the simplified Chinese banners read “Chengdu add oil!”, “China add oil!” and “We will see each other soon”.

“Add oil” is a Chinese phrase often used to express encouragement or support.

“Before leaving, the staff of the US embassy in Chengdu did not burn any documents. Instead, they raised banners to cheer for Chengdu! Cheer for China! Chinese people have forgotten the sense of propriety, justice, honesty and honour, and should really learn from these American people!”

US-China relations spiralled in late July after the US consulate in the Chinese city of Chengdu was ordered to close, in retaliation for the forced closure of Beijing's consulate in Houston, Texas. Both sides alleged the other had endangered national security, as AFP reported in this article.

The photo was also shared here on Facebook, here and here on Twitter, and here on Weibo alongside a similar claim -- all after the closure of the US consulate in Chengdu on July 24.

A keyword search of the text on the banners in the photo found this February 5, 2020 article published on the WeChat account of CAAC Inflight Magazine, a state-controlled publication in China.

The article’s simplified Chinese-language headline translates to English as: “On the last flight before temporarily leaving China, pilots held up banners in the cockpit”.

It features a photo similar to that in the misleading posts. The same group of people can be seen standing together. They can be seen wearing United Airlines uniforms and holding identical banners.

Below is a screenshot comparison of the image in the misleading posts (L) and the photo contained in the CAAC Inflight Magazine article (R):

The report reads, in part: “Affected by [China’s] epidemic situation, during the time from February 5 to March 28 (eastbound), United Airlines will suspend flights between US and the city of Beijing, Chengdu, and Shanghai.

“On February 3, on Flight UA8 from Chengdu to San Francisco, tourists captured images like these. / On the cockpit windows, two pilots raised banners ‘We will be back United Airlines’ and ‘Chengdu add oil’”.