Skip to main content
A security personnel stops a vehicle at a checkpoint in Divulapitiya on the outskirts of the Sri Lankan capital of Colombo on October 4, 2020, as police imposed a curfew on the towns of Minuwangoda and Divulapitiya following the discovery of a coronavirus patient, the first case reported from the community after several weeks. (AFP / Ishara S. Kodikara)

A photo has been shared repeatedly in multiple Facebook posts and in an online article alongside a claim it shows suspected coronavirus patients fleeing a quarantine centre-bound bus after a road accident in Sri Lanka. The claim, however, is misleading; law enforcement and health officials said no one left the vehicle after the accident on October 9, 2020 and all passengers were transported to the quarantine centre.

The claim was published in this Sinhala-language article published on October 10, 2020. It states the incident happened in the Sri Lankan city of Nuwara Eliya.

The report’s headline translates to English as: “Group of persons who were being transported to quarantine flee in Nuwara Eliya”. 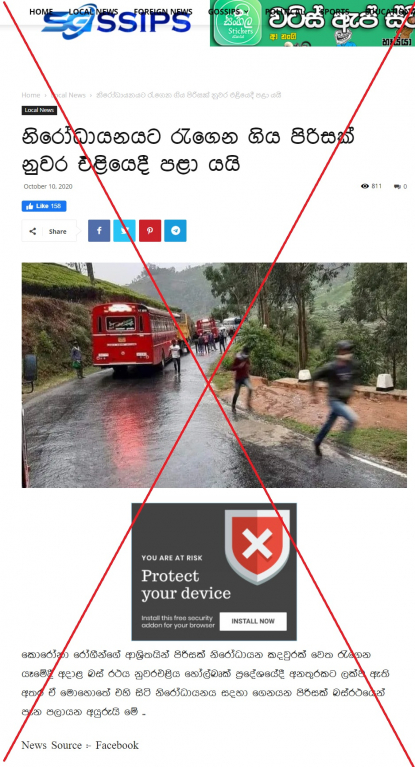 The body of the article translates as: “This shows a group of persons, who were identified as close contacts of a few Covid-19 positive patients, fleeing the bus they were being transported to the quarantine center close to the Nuwara Eliya Holbrook area. They fled the bus when it had an accident enroute.

The photo was also shared alongside a similar claim on Facebook here, here, here and here.

The claim, however, is misleading, according to local law enforcement and health officials.

“The bus carrying the group to the quarantine centre had collided with another bus and the traffic was at a standstill for a couple of minutes. But none of the persons in the bus escaped or even left the bus. The group were transported to the quarantine centre as planned on October 9, 2020,” a top police official in the nearby town of Ragala told AFP by phone on October 14, 2020.

In response to the misleading posts, an official at the nearby Ragala Medical Office of Health told AFP by phone on October 15, 2020 that “there have been no incidents of persons meant to be quarantined fleeing.”

The photo shared in the misleading posts appears to have been originally published on Facebook here on October 9, 2020. The post accurately states a bus bound for a quarantine centre collided with another bus.

On October 10, 2020, the same Facebook user published another post expressing concern about the photo subsequently being shared with a false claim.

The follow-up post translates as: “I published a news item about a bus transporting persons to a quarantine centre suffering an accident along the Nuwara Eliya-Ragala route yesterday. That was to make people aware of the traffic congestion that the accident caused. But I see now that certain page administrators have shared the image published on this page without any context and are spreading misinformation. But that is not what happened.

“Following the accident, several military personnel in PPE kits told the people gathering in the area to look at the accident, to disperse and to stay put in their own vehicles. In the meantime, several others who were proactive attempted to clear the traffic congestion and make space for the vehicles to move forward and they are the individuals seen in the image.  It is a false claim to state that this picture shows those meant to be in quarantine fleeing the bus.