Skip to main content
Pro-democracy protesters give the three-finger salute while holding up their mobile phones with lights outside the Prachachuen police station in Bangkok on October 30, 2020, after activists including Student Union of Thailand spokesperson Panusaya Rung Sithijirawattanakul, Panupong Mike Jadnok and Parit Penguin Chiwarak were released from jail. (AFP / Jack Taylor)

Multiple Facebook posts have shared a claim that Thai protest leaders have been granted political asylum in the United States by the CIA. The claim is false: the CIA does not grant political asylum as it falls under the US Department of Homeland Security; the protest leaders were still in Thailand -- and you cannot claim asylum in the US until you are in America; the US Embassy in Bangkok said the claim was “completely false”.

The claim was posted here on Facebook on November 2, 2020.

The captions translate to English as: “Several Free Youth leaders have already applied to seek asylum to USA. The CIA has already approved this and allowed these students to do further study in US with US scholarships, and they will return to teach at Thammasat University in 5-10 years.” 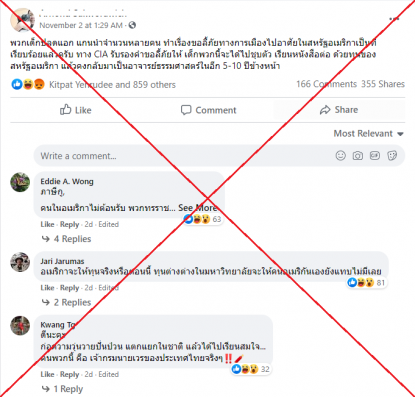 The CIA does not approve asylum.

People may apply for asylum through U.S. Citizenship and Immigration Services (USCIS), a division of the Department of Homeland Security (DHS), according to the USCIS website.

One other option is to apply with an immigration judge at the Executive Office for Immigration Review (EOIR) in the Department of Justice, according to the American Immigration Council.

“Both application processes require the asylum seeker to be physically present in the United States,” it says.

Although the misleading post did not name the activists it claimed had been given asylum, three of the most prominent Thai pro-democracy leaders were in hospital in Bangkok on Saturday October 31, 2020, after they were detained on sedition charges since mid-October, AFP reports here.

The three pro-democracy leaders remained at the hospital until November 4, a Public Relations officer of Praram 9 Hospital told AFP.

The US Embassy in Bangkok also said that the US had not granted asylum to Thai activists as claimed in the misleading post.

In an emailed response to AFP on November 4, 2020, Nicole Fox, Presse Attache of U.S. Embassy Bangkok said: “There is a wide range of disinformation alleging U.S. involvement in Thai politics being circulated.”

“The recent allegations about political asylum in the United States are completely false.

These allegations also indicate a complete lack of understanding of how the U.S. asylum process works. To apply for asylum, an asylum seeker must be physically present in the United States.”