Skip to main content
This photo taken on January 11, 2013 shows pictures of children placed by the government to dissuade potential suicides along the railing at Mapo Bridge -a common site for suicides- over Seoul's Han river. The South Korean capital has installed anti-suicide monitoring devices on bridges over the city after 196 people jumped to their deaths on 2012 according to South Korean officials. The new initiative -- in a country with the highest suicide rate among leading developed nations -- incorporates closed-circuit television cameras programmed to recognize motions that suggest somebody might be preparing to jump from a bridge. AFP PHOTO / Pedro UGARTE (Photo by PEDRO UGARTE / AFP) (AFP / Pedro Ugarte)

An image purporting to show the "genuine suicide note" of late South Korean comedian Park Ji-sun’s mother has been shared multiple times across social media platforms. These posts circulated online just a day after the comedian and her mother were found dead at their home in Seoul. However, this claim is false; the image actually shows a note featured in a scene in the 2018 South Korean television series “Children of a Lesser God”.

Park Ji-sun is a prominent South Korean comedian who was found dead at her home in Seoul on November 2, 2020 with her mother, according to this AFP report. A police offer is cited as saying there were "no signs of outside intrusion or murder".

South Korea's Yonhap News Agency also reported here on the same day that police found a page-long suicide note written by Park’s mother at the scene, but details of the note will not be made public as per the family's request.

The image was also shared here on Facebook, here on Naver and here on the South Korean blog Tistory.

A reverse image search found the note featured in the misleading posts in this video published on the YouTube account of South Korean broadcaster OCN, on March 25, 2018.

The video title suggests the clip shows a scene from Episode 8 of the South Korean television series "Children of a Lesser God", which aired in 2018.

Below is a screenshot of the note which appears at the video’s 33-second mark: 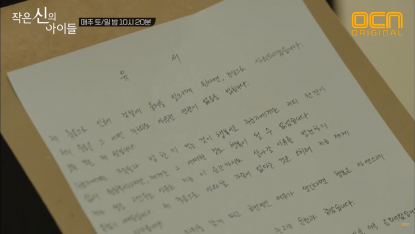 Below is a screenshot comparison of the image in the misleading posts and the scene from the “Children of a Lesser God” series: