Skip to main content
A health official wearing protective gear sprays disinfectant on the street near the Sarang Jeil Church, a new coronavirus infection cluster, in Seoul on August 18, 2020. - South Korea on August 18 ordered nightclubs, museums and buffet restaurants closed and banned large-scale gatherings in and around the capital as a burst of new coronavirus cases sparked fears of a major second wave. (AFP / Jung Yeon-je) 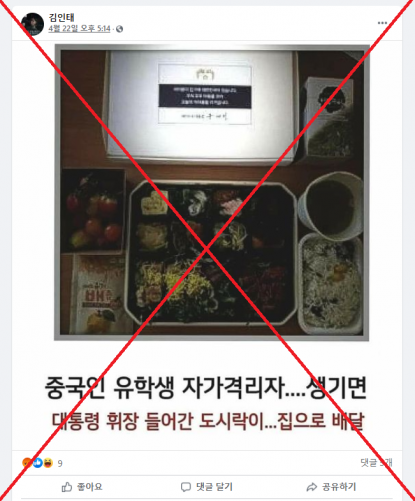 The Korean-language caption on the image reads: “If a visiting Chinese student goes into quarantine at home, a lunch box with a presidential stamp is delivered to their home.”

As of May 17, 2021, all people entering South Korea are required to quarantine either at home or in a hotel for two weeks due to the coronavirus pandemic.

The same photo was shared alongside a similar claim on Facebook here, here, here and here.

The lunch box in the photo was given to a South Korean citizen who was quarantined after being airlifted on a chartered plane out of the Chinese city of Wuhan in February 2020, the South Korean government said.

Wuhan was the first epicentre of the Covid-19 outbreak.

A similar misleading claim has circulated online since March 2020.

Park Neung-hoo, South Korea’s Minister of Health and Welfare refuted the misleading claim in a press briefing on March 15, 2020, according to this online record.

A press release included in the briefing labelled a Facebook post that circulated the claim as false, noting the meal was provided to a South Korean citizen from Wuhan: 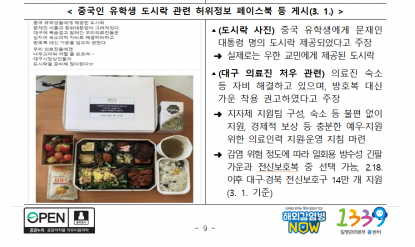 The deputy spokesperson for South Korea’s presidential office, the Blue House, said in a briefing on March 2, 2020, the claim that the photo showed a lunch box given to Chinese students was “fake”.

He said the lunch boxes with a South Korean presidential seal were not issued in any instance other than for the South Korean citizens evacuated from Wuhan.

Contacted by AFP on May 14, 2021, a Blue House official said the latest misleading Facebook posts had continued to amplify false information about the lunch box.

The same photo was also featured in Instagram posts (here and here) in February 2020, and a similar lunch box can be seen in this news article, all of which identify the lunch box as having been given to South Korean citizens.