Skip to main content
A handout picture provided by the Saudi Press Agency (SPA) on May 9, 2021 shows Pakistan's Prime Minister Imran Khan and his wife (C) performing the Umrah pilgrimage in the holy city of Mecca. (Photo by Ahmed NURELDINE / SPA / AFP)

The post’s Urdu-language caption translates to English as: “[Imran Khan] is saying that for becoming a Muslim, it is not necessary to accept Prophet Mohammad as the last prophet of Allah. Where the guards of the finality of the prophethood have gone?”

Khan can be heard saying in the video: “Allah is the God of all human beings. All should be equal before the law and this was in the state of Medina [set up by Prophet Mohammad]. Everyone had their rights in that state, be it Christians or Jews, those were the human rights and I say that all are equal before the law, but to say that anyone who does not accept Prophet Mohammad as the last prophet cannot be a Muslim.” 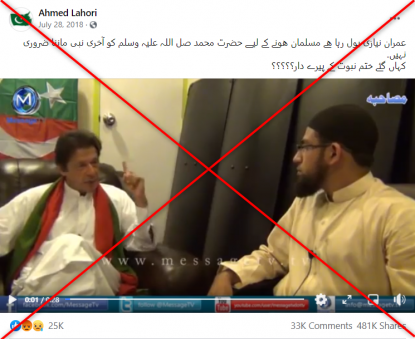 The finality of the prophethood is considered an unassailable tenet of Islam in Pakistan, a Muslim majority state.

The same video has been shared in multiple Facebook posts such as here, here and here alongside a similar claim.

The full interview shows Khan stating that Muslims must accept Prophet Mohammad as the last prophet of Allah.

The full interview was posted on Message TV’s Facebook page here on October 5, 2014.

The clip in the misleading videos corresponds with the original footage from the one-minute 27-mark to the two-minute 11-second mark.

Below is a screenshot comparison between the original Facebook video by Message TV (L) and the video in the misleading posts (R ) :

The Constitution of Pakistan states that anyone who does not believe in the finality of the prophethood of Prophet Mohammad cannot be a Muslim.

An amendment in Article 106 of the Constitution made on September 21, 1974 reads: “A person who does not believe in the absolute and unqualified finality of the Prophethood of Muhammad (peace be upon him) the last of the Prophets or claims to be a prophet, in any sense of the word or of any description whatsoever, after Muhammad (peace be upon him), or recognizes such a claimant as a prophet or a religious reformer, is not a Muslim for the purpose of the Constitution or law.” 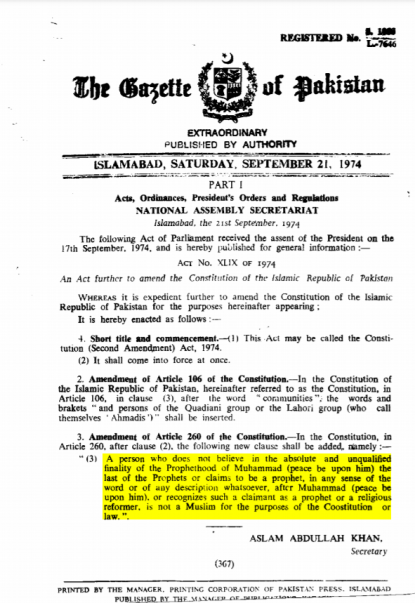 A screenshot taken on May 16, 2021, of an amendment in the Constitution of Pakistan