A graphic has been shared hundreds of times in multiple posts on Facebook which claim the indigenous peoples of the Americas “sacrificed” their leaders “as an offering to the gods” during epidemics. The claim is misleading: historians and anthropologists told AFP that epidemics did not occur until the arrival of Europeans in the Americas and that there is no evidence to show that indigenous communities sacrificed their leaders during those epidemics.

The claim was published here by a New Zealand-based Facebook user. The post has been shared more than 220 times. 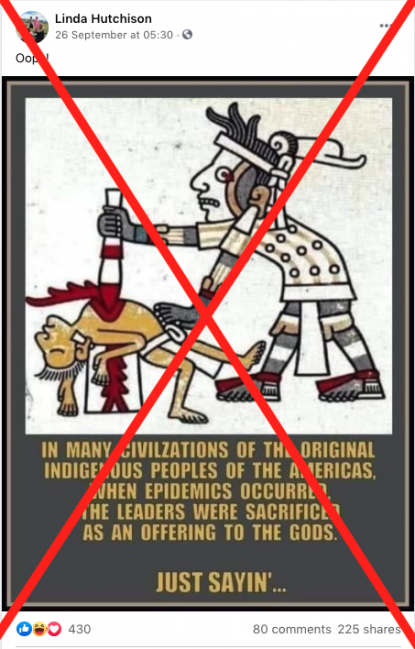 The image in the post has been taken from a section of Codex Laud, a pictorial manuscript believed to have originated in Mexico during the Aztec empire.

The text written under the image states “IN MANY CIVILZATIONS [sic] OF  THE ORIGINAL INDIGENOUS PEOPLES OF THE AMERICAS, WHEN EPIDEMICS OCCURRED, THE LEADERS WERE SACRIFICED AS AN OFFERING TO THE GODS”.

The graphic has also been shared hundreds of times, here, here, here and here on Facebook.

The claim, however, is misleading, according to multiple experts in Mesoamerican and Pre-Colombian societies.

The Aztecs and Incas are the most studied historical empires native to the regions known today as Latin America before the arrival of Europeans in the Americas in 1492.

From around 1345 to 1521 the Aztec Empire dominated Mesoamerica, which now encompasses a large proportion of Mexico. The Incas ruled the Andean regions of South America from 1400 to 1533.

Professor Alan Covey from the University of Texas, an archaeologist specialising in the Incas, said although there is evidence the Incas and the Aztecs both engaged in human sacrifice, there is a lack of evidence to support the specific claim in the misleading Facebook posts.

“I don't think there was evidence for epidemics before Europeans arrived, and the ones that reached highland Mexico (smallpox, 1520) and the Andes (possibly smallpox, c.1525) killed a lot of the native nobility, who were living in cities, possibly including the current Aztec and Inca rulers,” he told AFP by email on September 30, 2020. “No description that I am aware of mentions sacrificing rulers.”

University of Alabama Professor of Mesoamerican Anthropology, Richard Diehl, said there was no evidence to support the claim in the misleading posts.

“The fact is that epidemics never existed in pre-Columbian America,” he said in an October 1 email. “The ancestors of the Native American left the Old World long before any such "crowd diseases" came into existence and so the infectious organisms never existed in the Americas until imported by the Europeans and their African slaves in the late 1400s and early 1500s. So no, they did not sacrifice their leaders.”

In response to the misleading posts, Dr John Verano from Tulane University, who primarily researches prehistoric populations of coastal and highland Peru, said: “This is not correct for any New World civilization I know”.

“Yes, there were societies who practiced human sacrifice in Mexico and Mesoamerica and in the Andes, but they did not choose their leaders as sacrificial victims. Important enemies, yes, but not their own,” Dr Verano said in an email on October 1, 2020.

“What is true is that a number of indigenous cultures sometimes sacrificed prisoners of war. They believed that the ultimate gift to the gods was the gift of human life--and they also wanted to make a political point to their enemies,” she said in an October 1 email to AFP.