A video of Russian President Vladimir Putin giving a public speech has been viewed tens of thousands of times on Twitter and Facebook, with embedded French subtitles purporting to show Putin criticizing world leaders for their “evil plan” to “eliminate the world's population” in 2021. The claim is false: the subtitles are fabricated and do not match Putin’s actual speech. The original video in fact shows Putin speaking during a military parade in 2016.

The video was published on Twitter here on March 6, 2021, alongside a purported Chinese translation of Putin’s speech. It has since been viewed more than 102,000 times. 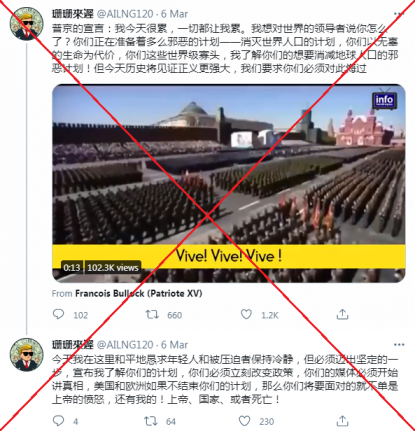 The post’s Chinese-language caption translates in English: “Putin's statement: I am tired today, tired of everything. I want to ask the leaders in the world what's wrong with you? What an evil plan you are preparing -- your plan to deliberately eliminate the world's population at the cost of innocent lives, you world-class oligarchs, I understand your evil plan to reduce the population of the earth! But today history will witness that justice is stronger, and we ask you to regret it.

“Today I am here peacefully begging the young and the oppressed to remain calm, but I must take a firm step and announce that I know your plan. You must change your policy immediately. Your media must start telling the truth. If the United States and Europe don’t end your plan, then you will not only face the wrath of God, but also mine! God, country, or death!”

The on-screen French subtitles correspond with the post’s Chinese caption.

The French subtitles do not match Putin’s actual speech in the video, which in fact shows Putin speaking during a military parade in 2016.

‌A keyword search on Google found this press release published by the official website of the President of Russia on May 9, 2016.

The article is headlined “Military parade on Red Square” and reads: “Vladimir Putin attended the military parade to mark the 71st anniversary of Victory in the 1941–1945 Great Patriotic War.”

The identifying footage can be seen from different parts of the video embedded in the article. The video is captioned: “Speech at Victory Day parade”.

Below are two screenshot comparisons between the Twitter video (L) and the video embedded in the article (R): 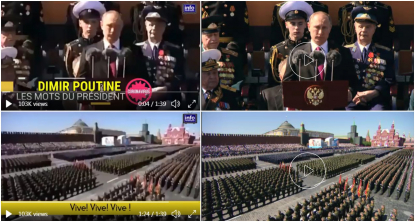 Putin’s speech was also included in the article, which has no corresponding mention of the criticism towards world leaders. 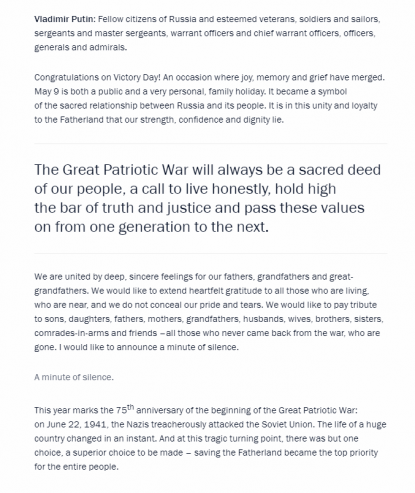 Screenshot of Putin’s speech (in part) included in the press release by the President of Russia website, taken on March 11, 2021