The man standing next to the late President Sukarno was an Arab-Indonesian journalist, not the father of an exiled Muslim cleric

A photo has been shared thousands of times on Twitter and Facebook alongside a claim that it shows the father of Rizieq Shihab, an exiled Indonesian Muslim cleric, standing next to the country’s founding father and first president, Sukarno. The claim is false; the man was an Arab-Indonesian journalist named M. Asad Shahab, who reported the news about the country’s independence; the cleric’s father is named Hussein Shihab. 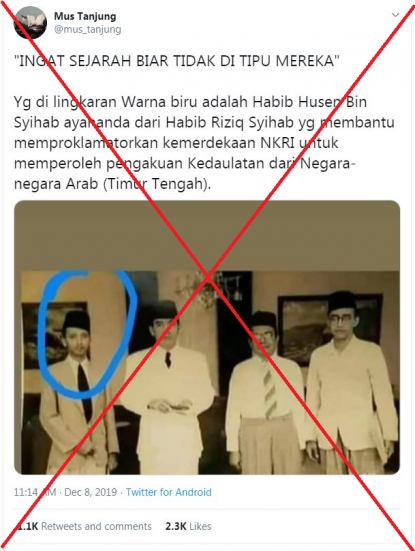 The post’s Indonesian language-caption translates to English as: “‘Remember history so you are not fooled by them’
“The man in the blue circle is Habib Husen Bin Syihab, the father of Habib Riziq Syihab, who helped with the proclamation of Indonesia's independence so it gained recognition from Arab countries (the Middle East).”

In Indonesia, the honorific title “Habib” is used to refer to Islamic scholars from the descendants of Prophet Muhammad.

“Riziq Syihab”, or Rizieq Shihab, is leader of the Islamic Defenders Front, an Indonesian Islamic hard-line group. The Muslim cleric, who was charged in a connection to a pornography case and for insulting the state ideology, has been living in Saudi Arabia since 2017.

The same photo has also been shared more than 1,200 times after it was posted on Twitter here, here, here and here; also on Facebook here.

The claim is false; the man was the late Arab-Indonesian journalist M. Asad Shahab, not Rizieq’s father.

A reverse image search on Google found the photo was previously published in the biography of Asad, written by his youngest son, A.M Shahab, in 2016. Translated from Indonesian to English, the biography is titled: They Who Spread News of Indonesian Proclamation: The Fight of M. Asad Shahab & the Arabian Press Board.

The image in the misleading post can be seen on page 192 of the book, as shown in the screenshot below: 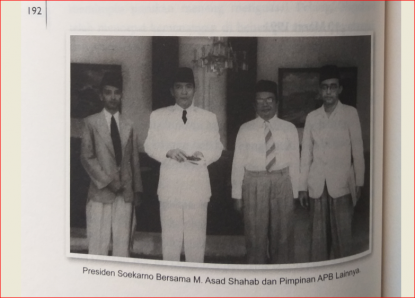 The photo's caption reads: “President Soekarno along with M. Asad Shahab and other APB leaders”.

The same photo was also published on this May 14, 2018, report by Indonesian history news outlet, Historia.id, about Asad.

The photo caption reads: “Mohammad Asad Shahab (left) with Sukarno and other leaders of the APB.” It cited the biography as the source of the photo.

“APB” refers to the “Arabian Press Board”, the news agency founded by Asad on September 2, 1945, two weeks of Indonesia’s declaration of independence, according to the book. It also said Asad died in 2011 at the age of 90 years old.

Below is a screenshot of the image in the misleading post (L) and the photo in Asad’s biography (R):

The names of Asad’s four children were listed in the page 359 of the biography: Ahmad Shahab, Aminah, Omniyah and A.M Shahab.

Below is a screenshot of the book page with details about Asad’s children: 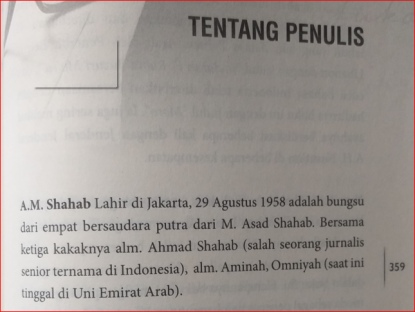 Rizieq’s father was named Hussein Shihab and died in 1966, according to multiple Indonesian media reports including Merdeka.com, Tribunnews.com and Viva.co.id.

This report from Indonesian newspaper Republika published an old photo of Rizieq’s father, with a caption that says: “Habib Hussein Shihab (wearing a blazer) while attending the Prophet’s birthday event at Majelis Habib Kwitang.”

Below is a screenshot of Hussein Shihab’s photo on Republika’s website: 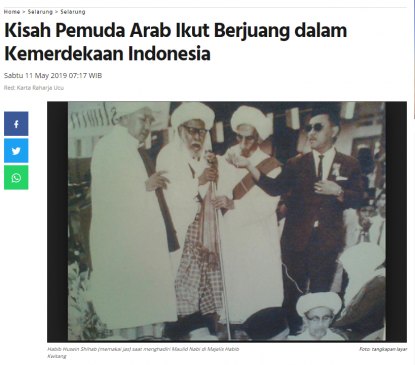