The man in this photo works for the New York Times and is messaging journalists, not protesters

Multiple Facebook posts and local media reports have shared an image they claim shows a "foreign commander" giving pro-democracy protesters in Hong Kong information about police movements. The claim is false; the man in the image is actually Kevin Roche, an employee of the New York Times newspaper, who was photographed communicating with other NYT journalists covering the July 28, 2019 protest.

The image has been posted repeatedly on Facebook, for example here on July 29, 2019 by a page with nearly 200,000 followers whose Chinese-language name translates as: "Respect for Hong Kong police".

In the image, which includes text and two photographs, a man wearing a grey baseball cap can be seen sitting on a stairway with a smartphone in his left hand.

A close-up photo of his phone screen purports to show messages to a person called Ezra Cheung.

The message the man is typing says in English: "they’re moving forward to the next intersection". 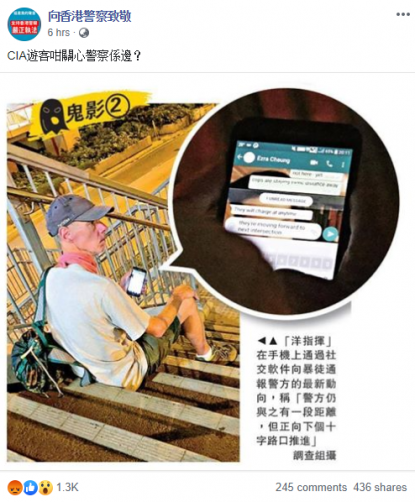 The text in the bottom right-hand corner of the image translates as:

"The 'Foreign Commander' is updating the mob on social media about the police's latest actions, claiming ‘there is still a distance between the police and the protesters, but now they are moving towards the next crossroads'."

The photo is credited to "the investigation group" and there is also a title in a yellow box in the top left-hand corner which translates as: "Ghost image 2".

The misleading Facebook post’s caption translates to English as: "CIA tourist, so concerned about where the police are?"

The same image has been published in reports by local Hong Kong media, for example Ta Kung Pao here and here, and also published by other media such as Wen Wei Po here and Sing Tao here.

The claims are false; the man in the photograph is Kevin Roche, who works for the New York Times in Hong Kong.

The name Ezra Cheung can be seen on the smartphone screen in the misleading image.

Ezra Cheung, who describes himself on his Twitter profile as a "part-time reporter @nytimes" tweeted about the incident on July 29, 2019, saying the claims were "fake news":

2 pro-Beijing papers, Ta Kung Pao and Wen Wei Po, accuse our buro tech manager of being a “foreign protester commander” and me of being a “rioter”. How funny! ? It’s fake news. The “commander” was @austinramzy. ?

Austin Ramzy, the Hong Kong correspondent for the New York Times, also tweeted about the claims:

Our bureau tech manager, who was out last night keeping me and @ezracheungtoto out of harms way, has been identified by the crack squad at Wen Wei Po as a foreign protest commander. Journalism pro tip: if you want to know who someone is, ask them pic.twitter.com/VOFRG3iLpp

New York Times spokeswoman Danielle Rhoades Ha confirmed in a statement emailed to AFP on Jul 29, 2019, that Roche is employed by the newspaper.

“Kevin Roche, the man in the photo, is a New York Times editor, who is among a team of reporters and editors involved in our coverage of the protests in Hong Kong. (In the photo, he is communicating with one of our reporters.)” she said.

“Our mission is to seek the truth and help people understand what’s going on in the world. A primary way in which we do this is by providing on the ground, eye-witness reporting.”

"The Times’s comprehensive coverage of the protests in Hong Kong and reaction in mainland China is available here," she added.