A video has been viewed tens of thousands of times on Facebook and Twitter alongside a claim it shows Turkish President Recep Tayyip Erdogan refusing to sit and shake hands with French President Emmanuel Macron in 2020. The claim is false; a longer version of the video shows Erdogan sitting next to Macron, German Chancellor Angela Merkel and Russian President Vladimir Putin during a summit on Syria in October 2018. 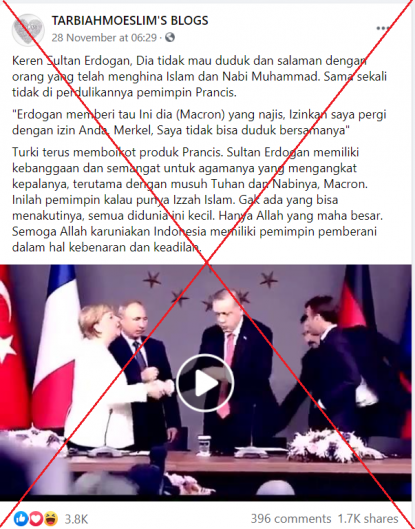 Translated from Indonesian to English, the lengthy post reads in part: “Sultan Erdogan is cool, he does not want to sit and shake hands with people who have insulted Islam and the Prophet Mohammed. He did not give any attention to the French leader.

“‘Erdogan told me. He (Macron) is impure. Allow me to leave with your permission, Merkel, I cannot sit with him.’”

Erdogan joined calls in the Islamic world in late October 2020 to boycott French products after Macron defended the right to publish cartoons depicting the Prophet Mohammmed, AFP reported here. The French president made the comments following the murder of a French schoolteacher who had shown his class cartoons of the Prophet.

The clip has garnered more than 88,000 views after being shared with a similar claim on Facebook here, here, here and here; as well as on Twitter here and here.

The same footage was shared with a similar claim in Malaysian on Facebook here and here.

A reverse image search on Yandex followed by a keyword search on Google found this two-hour 17-minute video which shows the same scenes as the clip shared in the misleading post.

The video was uploaded on October 27, 2018, on the YouTube channel of Russian state-backed video news agency Ruptly. It is titled: “LIVE: Erdogan, Putin, Macron, Merkel give statement following Syria summit.”

Earlier in the genuine video, Macron can be seen sitting next to Erdogan during the conference.

Below is a screenshot comparison between the clip in the misleading post (L) and Ruptly’s video (R): 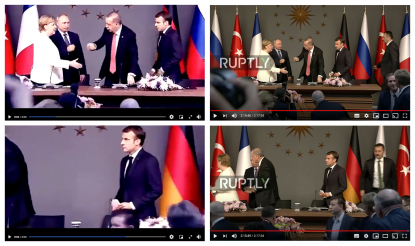 The photo’s caption reads: “(From L) Russian President Vladimir Putin, German Chancellor Angela Merkel, Turkish President Recep Tayyip Erdogan and French President Emmanuel Macron, hold hands after a conference during a summit called to attempt to find a lasting political solution to the civil war in Syria which has claimed in excess of 350 000 lives, at Vahdettin Mansion in Istanbul, on October 27, 2018. The leaders of Turkey, Russia, France and Germany are set to meet in Istanbul to try to find a lasting political solution to the Syrian civil war and salvage a fragile ceasefire in a rebel-held northern province.”