A photo of a woman lying in a hospital bed with medical equipment attached to her body has been shared hundreds of times on Facebook and Twitter alongside claims that the woman was a doctor who died after being beaten by a Muslim mob while trying to administer novel coronavirus tests. The claim is false; the late woman's husband and local police told AFP the woman's death was not the result of pandemic-related violence.

The photo has been shared nearly 200 times since being published on Facebook here on April 9, 2020. The post’s Hindi caption translates to English as: “Dr. Vandana Tiwari passed away today. She had gone for coronavirus testing in UP last week, but she got seriously injured when some Islamic jihadists attacked. She succumbed to her injuries today.”

UP refers to the north Indian state of Uttar Pradesh.

Uttar Pradesh police refuted the claim on Twitter on April 9, 2020, calling it “misleading information”. The force clarified the photo in fact shows a woman in hospital in the central Indian state of Madhya Pradesh.

An AFP journalist in Delhi interviewed the deceased pharmacist’s husband, Lokendra Sharma, by phone on April 20, 2020. When asked whether his late wife had died as a result of an attack by a "Muslim mob", Sharma said the claim was false.

"My wife was working as a pharmacist at the Shivpuri medical college," Sharma said. "She was also deployed as caretaker of the girl's hostel. She was distressed and afraid as she was left alone in the hostel after all the students went to their families soon after the lockdown was imposed in wake of coronavirus, but she was not allowed to leave the campus. I think this stress and pressure caused her illness.

“We took her to a neurology hospital in Gwalior but she was not given much care as doctors were busy amid the coronavirus pandemic. We shifted her to Birla Hospital the next day, where doctors said that she had a brain hemorrhage. They conducted an operation on her but she remained in a coma for one week and died in the afternoon of April 7, 2020."

He also sent photos of documents, including his late wife’s death certificate, to AFP by WhatsApp message.

Below is a screenshot of Tiwari’s death certificate that states her causes of death as: CVA (Cerebrovascular Accident or brain hemorrhage) with middle cerebral artery infarction; ACA (Anterior Cerebral Artery) infarction with increased intracranial pressure and Cardiopulmonary Arrest. 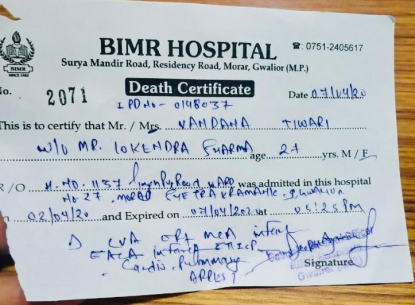 According to local media reports published on 8 April, 2020, for example here, here and here, Tiwari was working as a pharmacist in the Government Medical College in the state’s Shivpuri district.

Dr. Ila Gujaria, dean of the Government Medical College, told AFP by phone on April 17, 2020 that Tiwari died after working as a caretaker in the medical college.

“Vandana Tiwari was deployed as caretaker of the girls’ hostel of the medical college. She was taken to Gwalior by her husband when she fell sick on March 31, 2020. Later we were informed that she died of brain hemorrhage in Birla Institute of Medical Research (BIMR) Hospital in Gwalior on April 7, 2020,” she told AFP.

Rajesh Singh Chandel, the Police Superintendent of Shivpuri, also said that Tiwari’s death was not the result of any pandemic-related violence.

“Vandana Tiwari was not a doctor, but a pharmacist and her death has nothing to do with coronavirus disease. She was not a part of the team engaged in the pandemic-related works,” Chandel told AFP by phone on April 9, 2020.

“She was admitted to Birla Hospital in Gwalior when she complained of illness two days ago, where she underwent an operation in her head, but she died on March 31 of brain hemorrhage,” he added.