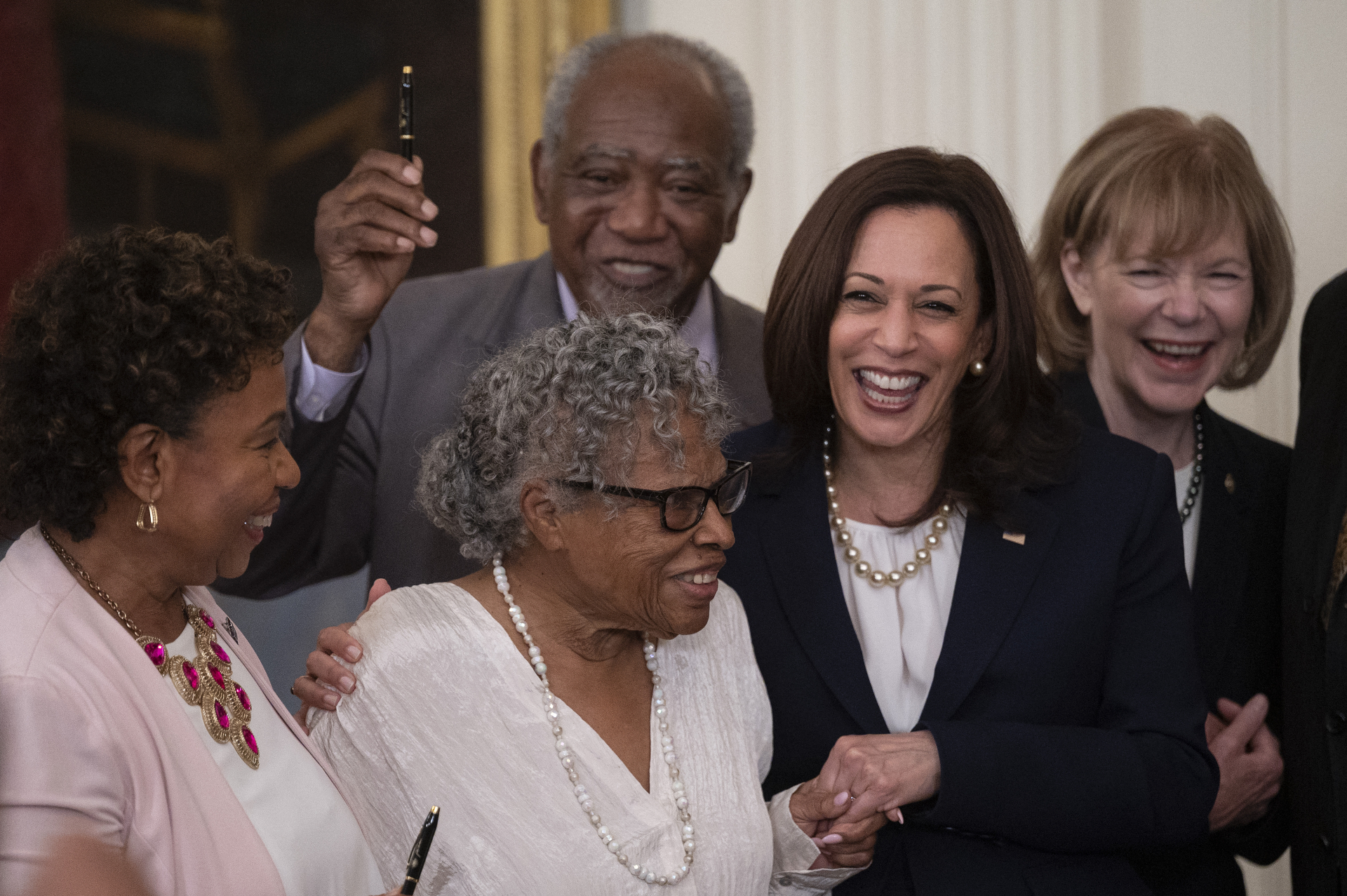 A photo gallery shared on Facebook claims to show US Vice President Kamala Harris celebrating Juneteenth with white women while being served by Black staff. This is misleading; the images do not depict an event to remember the end of slavery in Texas but are instead from a bipartisan dinner for female senators that Harris hosted days earlier.

“Toasting Junteenth (sic) with friends … and the black help,” reads a Facebook post shared more than 7,000 times. It was also shared here, here, and here.

Below the caption, four photos show the vice president and 20 female guests sitting down for a meal. One picture shows Harris standing with her glass raised, perhaps for a toast.

There are currently 24 women in the Senate. Harris, previously a senator, is the first woman, the first Black and the first person of Asian heritage to be vice president.

In the background of the photos, a Black man and a Black woman are standing, apparently waiting on the women. Two of the four photos are cropped versions of the first two, zoomed to highlight the staff. 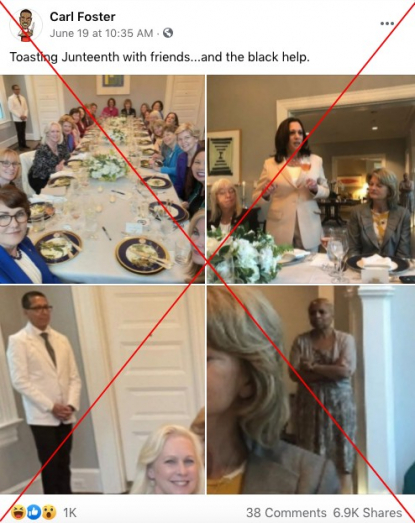 The post was published on June 19, 2021, the first time that “Juneteenth” was marked as a holiday to commemorate the freeing in 1865 of the last enslaved Americans in Texas.

President Joe Biden had earlier declared the holiday, further elevating a day that had gained visibility since the US police killing of George Floyd in 2020 sparked a national reckoning over racism.

The photos of Harris are real but they were not taken at a Juneteenth celebration.

Stabenow was invited to a bipartisan meal at the official residence of the vice president in the capital, along with the 23 other women serving in the Senate.

Alaska Republican Senator Lisa Murkowski, on Harris’ left in the “toast” image, also tweeted photos of the event: “Continuing our tradition of having a bipartisan, women Senators’ dinner. Thanks to the Vice President for hosting tonight.”

Continuing our tradition of having a bipartisan, women Senators’ dinner. Thanks to the Vice President for hosting tonight. pic.twitter.com/4qalGRZh9A

On June 19, 1865, a Union Army general announced to enslaved Black people in Galveston, Texas, that they had been freed by Abraham Lincoln three years before, leading to that day being celebrated as the end of slavery.

Juneteenth is the first new US national holiday in almost four decades.

Although Harris was not celebrating Juneteenth in the photos shown in the social media posts, she was with Biden when he signed the Act to authorize the holiday. During the ceremony Harris held the hand of Opal Lee, 94, often referred to as the grandmother of Juneteenth.

Reactions to the holiday varied across political lines. Some praised the move as overdue, while some conservative commentators and a minority of Republican lawmakers argued against official recognition of the day, arguing that it would take away from July 4th’s importance, or dismissing it as “identity politics”.

On the left, however, some commentators called out making Juneteenth a holiday when teaching about race is being restricted in some US states.