An article shared thousands of times on various Facebook pages claims that a New York restaurant called ‘SKIN’ is the first in the world to get a licence to serve human flesh as food. This is false; the article is purely fictional but is being shared as real news.

The article, which we’ve archived here, claims that 'a newly opened restaurant within the city limits is boasting the nation’s first license to serve human flesh on the menu'.

'As a species, we are at the top of the food chain, and the only meat left to tackle was other humans,' the article quotes Mario Dorcy, the owner of the restaurant and 'a 4-star Michelin chef' to have said. 'We battled long and hard to be able to serve human meat in our restaurant, and the government finally conceded that were were in the right'.

The article has been shared over 7,000 times on Facebook since it was published by Empire News in March 2016, according to online social media monitoring tool CrowdTangle

It has been shared on multiple Facebook pages, including here, here and here. 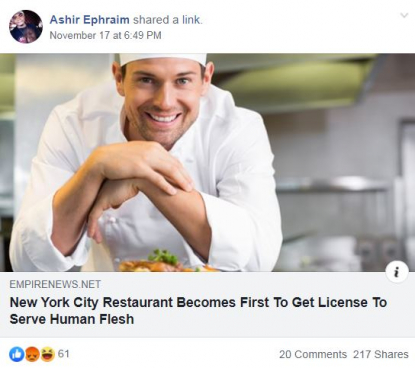 A screenshot taken on November 21, 2019, showing a Facebook post of the article claiming New York restaurant got licence to serve human flesh

Among the comments on the post, some express disgust and anger at the government for purportedly issuing the licence, while others say the post must be satirical or a ‘hoax’.

'OMG. I'll totally become vegetarian. Where is this world coming to??' read one comment. 'Are peoples minds twisted? ? That means you should constantly look over your shoulder not to be seized for a dish. It's scary. OMG!!! Nay'.

The post has also been shared in WhatsApp groups in Nigeria.

A screenshot taken on November 21, 2019, showing the same article being shared on WhatsApp in Nigeria

AFP ran a Google search and found no evidence of a chef called Mario Dorcy in New York. There are also no results for the apparently '4-star Michelin chef' in the Michelin guide.

AFP also found that ‘Empire News’ is a parody website. The website posts a disclaimer saying, 'Empire News is intended for entertainment purposes only. Our website and social media content uses only fictional names, except in cases of public figure and celebrity parody or satirization. Any other use of real names is accidental and coincidental'.

How to spot satirical websites

Too strange to be true? It most likely isn't true. When you find a story too strange to believe, scroll down to the bottom of the page. This is often where you'll find disclaimers on parody websites.

Some news and research organisations publish lists of news parody websites. You could find some of those here, here, and here.