It’s a joke - the man still has both his kidneys

An Australian man said in a Facebook post that he sold one of his kidneys for $60,000 in Thailand to buy a new car, posting photos of a kidney in a bowl as well as of himself in a hospital gown and at a car dealership. The post was a joke, the man told AFP, adding that he had not sold a kidney; many people missed the humour, he said, adding that he still receives requests for information on how to sell your organs.

In his Facebook post on July 24 user Phillip Hill wrote that he had sold his kidney to help buy a car. It has been shared more than 40,000 times.

The post reads: “When you need lots of money for a new cruiser, just sell a kidney. They give you $60000 in Thailand. I've got one left so all good.” 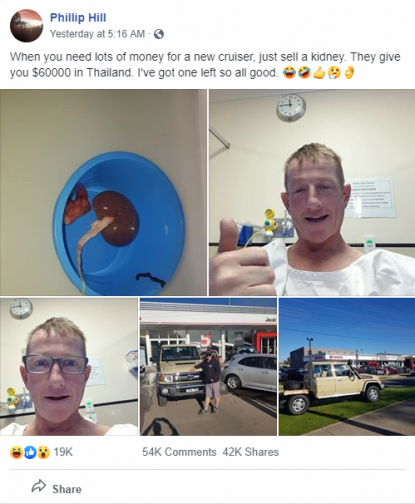 The same photo montage and caption appear here and here on Facebook, as well as on Twitter here.

Hill told AFP via phone that the post was just a joke. He said two of the photos were from when he had surgery recently -- but not to remove a kidney. The two photos at a car dealership were taken when he was buying a new vehicle for work, he added.

Hill, who works as a butcher, said the kidney shown in a blue bowl in one of the photos was taken from a lamb.

The appearance of the kidney in Hill’s post is similar to a photo of a sheep’s kidney, which can be seen on science supply company site Science Resource Box here.

“I’ve had 300 people on Messenger asking me how to sell their kidneys,” Hill told AFP. “It’s just gone ballistic.”

In a post on the Facebook page for his business, Alpine Mobile Butcher, Hill also states that he did not sell his kidney -- and includes a photo he says shows where he got the original image of the organ from.

Hill writes in the post: “Hey everyone this is doing the rounds. Fyi I didn’t sell my kidney but yes I got a new cruiser for work. Here is the man I got the kidney off. We all had a good laugh”

The hoax was written about in articles by Australian news outlets Pedestrian and 7 News, as well as New Zealand website Newshub.