A video shared hundreds of times on Facebook purports to show monkeys stealing food from a hospital in South Africa's capital Pretoria, pondering the country's readiness to fight the novel coronavirus outbreak. The claim is false; the video was taken before the COVID-19 crisis in a different part of the country.

The post has been shared more than 800 times and the 30-second video has clocked up more than 21,000 views since March 5.

It shows a troop of monkeys scavenging for food among patients in a hospital ward.

“Pretoria hospital wtf and we prepared for the corona virus omf (sic),” the caption reads. 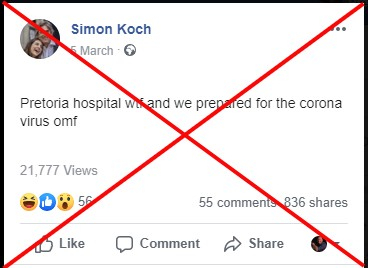 Screenshots from the video showing monkeys in the hospital ward, taken on March 12, 2020

The video was again linked to a Pretoria hospital by a Facebook news account with 1.3 million followers. Hours later the post was edited and the word "Pretoria" was replaced with "Durban", a coastal city in KwaZulu-Natal province more than 500 km away.

Another post here with a longer version of the video alleged the hospital was “somewhere in Zimbabwe”, but some users instantly rejected the claim in the comments. A screenshot taken on March 13, 2020, of comments (names pixelated) denying it was a Zimbabwean hospital overrun by monkeys

Where was the video taken?

The clip shows a ward inside RK Khan Hospital, a large government-run facility in Durban. It is not one of the nine hospitals designated to treat patients infected with the novel coronavirus.

News of the invading primates first made headlines in February 2019. Local media published the video and news coverage prompted former Health Minister Dr Aaron Motsoaledi to set up a task team to find ways of keeping the intruders out.

Monkeys are a common sight in Durban and regularly target homes in search of food.

AFP has contacted the hospital for comment but is yet to receive a reply.

As of March 13, South Africa has had 24 people test positive for the novel coronavirus.