Thousands of Facebook users have shared a picture that supposedly shows an assistant commissioner of police arrested for aiding kidnapping operations in Nigeria. This is false; according to the Nigeria Police Force, the man in question is simply an impersonator in police uniform who was arrested in January 2019.

Dozens of different Facebook posts claim that the picture shows an assistant police commissioner who was caught alongside kidnappers in either northern or southern Nigeria, or an unspecified location. We’ve archived some of the posts here, here, here, here, and here. 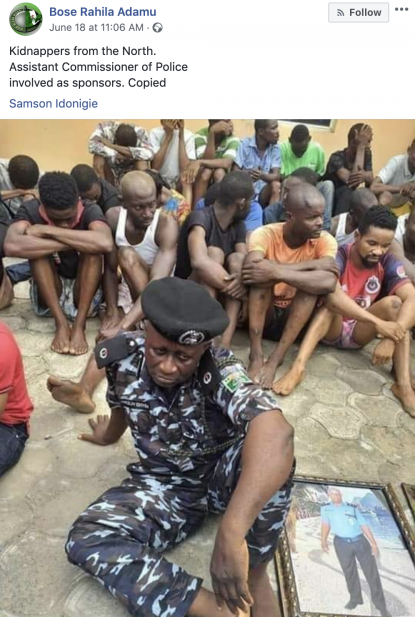 A screenshot taken on June 26, 2019 showing a Facebook post claiming this is an assistant police commissioner involved in kidnappings

The same picture has been published out of context by popular Nigerian blogs, including GistMania, and on the home-grown social network Nairaland.

We ran a Google reverse image search, which led us to these two websites, archived here and here, which name the man in police uniform as Kingsley Udoyen, who was arrested in January 2019 in Abak, Akwa Ibom State, in southern Nigeria. The second website includes a photo of the man taken from a different angle.

According to these reports, Udoyen posed as a police officer in order to threaten and defraud members of the public, wearing a uniform procured for him by his girlfriend.

Police spokesman Frank Mba confirmed to AFP via email that the man is indeed Kingsley Udoyen, and that he was arrested in Akwa Ibom State. 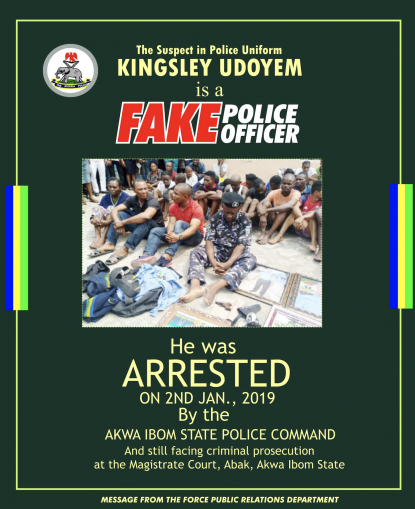 A screenshot taken on June 26, 2019 showing a public notice by the Nigeria Police Force about the case

Mba said the man “is an impersonator who was posing as an Assistant Commissioner of Police to defraud and threaten unsuspecting members of the public”.

Udoyen has since been arraigned before a Magistrate Court in the state.