An image of a modern ballistic weapons vehicle and a fighter jet has been shared on Facebook in Ethiopia alongside a claim that it shows firepower recently acquired from Iran and stationed in front of the military base in Debre Zeit, Ethiopia. This is false: an Iranian official confirmed with AFP Fact Check that the Ethiopian army has not purchased any weapons from Iran. Furthermore, the image is a composite of two separate photos, both unrelated to Ethiopia.

The post, archived here, was published on Facebook on July 2, 2021, and has been shared more than 180 times.

It features an image of a ballistic weapons vehicle with an old fighter jet repurposed as a monument in the background. 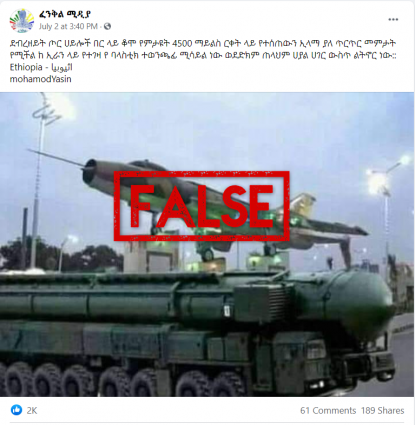 “What you see at the entrance of the military camp in Ethiopia,” reads the Amharic caption, translated into English.

The post’s caption further claims that the vehicle in the image was recently acquired from Iran and has the capability of hitting any target up to 7,200 kilometres (4,500 miles) away.

“It is an Iranian-made ballistic missile that can undoubtedly hit a target of 4,500 miles,” it reads.

The same claim was also shared on Facebook here and here.

However, the claim is false. Ethiopia does not have this modern military technology. The image was doctored using two separate photos.

A similar claim surfaced on Facebook in late June, purporting that the Ethiopian army had acquired ballistic weapons from Iran. AFP Fact Check debunked it here.

The Iranian embassy in Addis Ababa had refuted the claims in an email sent to AFP Fact Check on June 29, 2021.

“Recently, there was no contact between high officials of the two countries and this allegation is fundamentally false and is fake news,” it told AFP Fact Check.

Furthermore, Guy Martin, a military expert and editor of defenceWeb, told AFP Fact Check that the Ethiopian army did not have the weaponry seen on Facebook.

“The recent claims Ethiopia has received Russian or Iranian surface-to-air or ballistic missile systems such as the S-300/S-400 are false. The latest Facebook photo of what is purportedly an Iranian missile in Ethiopia, with an Ethiopian fighter jet in the background, is in fact a photoshop composite image showing a retired fighter jet in Egypt along with a Russian missile system,” he said.

“The only air defence systems Ethiopia has recently received were Pantsir-S1 systems, and there are no records of Ethiopia receiving S-300-type weapons or ballistic missiles.” Furthermore, AFP Fact Check did not find any records of Ethiopia acquiring these types of ballistic defence systems, from Iran or any other nation, in the Stockholm International Peace Research Institute’s (SIPRI) database.

While there is a monument of a fighter jet at the entrance of the Ethiopian Air Force base in Debre Zeit, the image in the false Facebook post shows a monument in Beni Suef, Egypt. 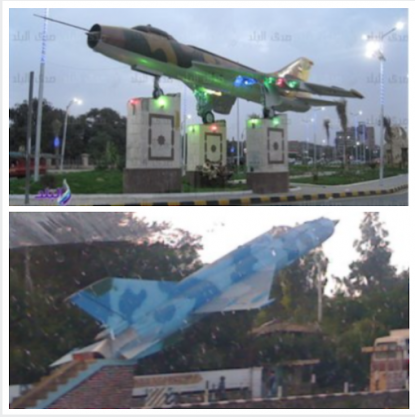 Monument in Beni Suef, Egypt (top) compared to the one in Debre Zeit, Ethiopia

AFP Fact Check traced the image to an article published in 2019 on an Egyptian news website. The second photo, featuring a military vehicle, was initially posted on a Russian military blog and shows the rehearsal of the 2016 Moscow Victory Day Parade in Alabino, Russia. 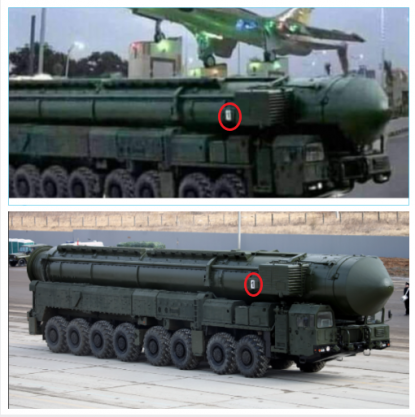