An image has been circulated on social media that purports to show a genuine news article about Pope Francis announcing that people must receive the Covid-19 vaccine in order to enter heaven. The posts, shared repeatedly in multiple Facebook posts, criticise the Pope's alleged comments. But the image in the posts is actually a screenshot of a satirical article; as of December 9, 2020 there are no credible reports of Pope Francis making such a statement.

One post was published here on Facebook on December 3, 2020. The image in the post shows a screenshot of an article. It is headlined: “Pope Francis Says Covid Vaccine Will Now Be Required To Enter Heaven”.

The English and Tagalog-language text overlay above the image reads, in part: "The devil in human form. How can Catholics believe this lying serpent? Does he think Catholics are STUPID or don't have BRAINS?” 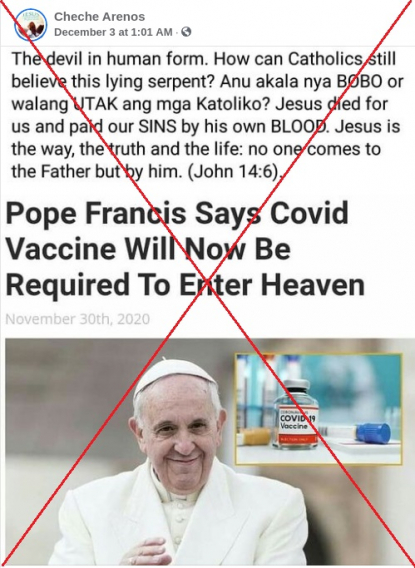 One commented: “Lets inject him first. Wait a week then see what happens to this idiot!!”

Another wrote: “False Pope teaching!!! He is deceiving his own self. Deceiving his followers around the world.”

The image was also shared here, here, here and here on Facebook, alongside a similar claim.

But the article shown in the posts originated from a satirical website.

A series of keyword searches on Google found the same article published here on The Babylon Bee, which describes itself as a “Trusted Source For Christian News Satire”. 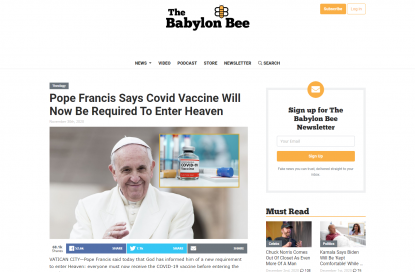 A screenshot of the satirical article

The website’s ‘About Us’ page reads, in part: “The Babylon Bee is the world’s best satire site, totally inerrant in all its truth claims. We write satire about Christian stuff, political stuff, and everyday life.” 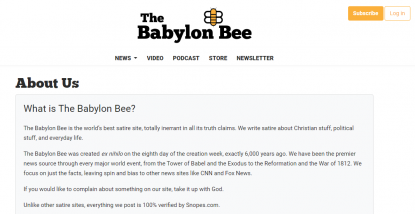 Screenshot of The Babylon Bee’s About Us page, taken on December 7, 2020

As of December 8, there are no credible media or Vatican-sourced reports that indicate Pope Francis has issued any such remarks about Covid-19 vaccines during the pandemic.