An image has been shared hundreds of times in multiple Facebook posts alongside a claim it shows a protest against coronavirus restrictions in the British capital of London. The claim is false; the image shows football fans celebrating in the English city of Liverpool after Liverpool Football Club won the UEFA Champions League in 2005.

The post’s caption reads: “Protesters against #lockdown #lunacy in Trafalgar Square standing side by side #maskfree REFRESHING ♥️ What a surprise the mainstream media barely touch on it. The people are rising against the ridiculous subjugation that is destroying lives, businesses the economy and creating massive government reliance and death. STAND UP against authoritarianism. In Nazi Germany the removal of freedoms was a stealth approach that ended with the Holocaust. Please remember that. #agenda21 #populationcontrol #vaccinations #billgates” 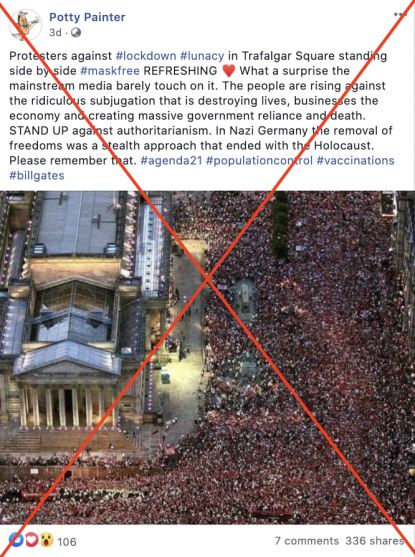 The post circulated one day after thousands gathered in London’s Trafalgar Square on August 29 to protest against coronavirus restrictions in England. Here is a report by UK newspaper The Guardian about the mass rally. 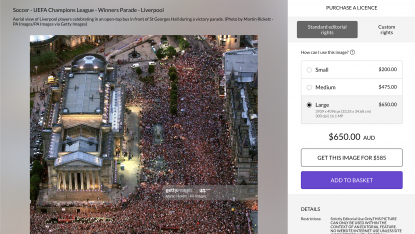 A screenshot of the Getty Images website as of September 3, 2020.

The image shows a crowd in front of St George’s Hall in Liverpool during a winner’s parade for Liverpool FC on May 26, 2005. The club won the UEFA Champions League that same year. Here is a report from The Guardian about the parade.

Below is a screenshot comparison between the image in the misleading post (L) and the Getty Images photo (R):

Local newspaper The Liverpool Echo reported here on March 31, 2019 that the image in the misleading posts also circulated in 2019 in false social media posts about a Brexit march.