A photo shared tens of thousands of times in multiple posts on Facebook, Twitter and Reddit shows three men in spacesuits without their helmets on. The posts present the image as evidence the moon landings did not take place. But the photo is being used out of context; it was taken at a US space centre in 1972 during an astronaut training session and was labelled as such by NASA; it was not published as a photograph taken “on the moon”.

This Facebook post containing the photo and claim has been shared more than 1,700 times since being uploaded on December 25, 2016, by a page with more than 41,000 followers.

The caption of the post reads: “So these guys on the moon took a moment to take their helmets off for this pic.” 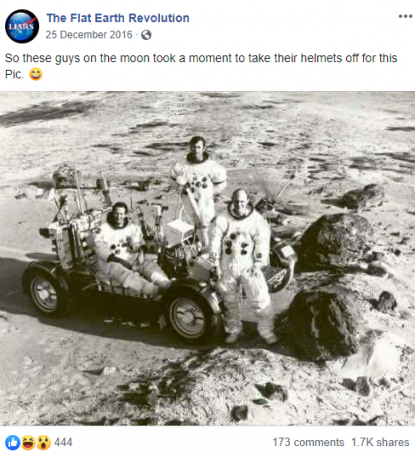 Multiple Facebook users commenting on the post appear to believe the photo is evidence the moon landing never took place.

Below is a selection of those comments with the users’ identities redacted by AFP: 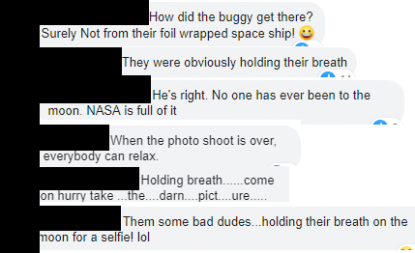 The same photo has been shared tens of thousands of times here on Facebook, here and here on Twitter and here on Reddit along with similar claims.

The photo is being used out of context; it shows astronauts training for a moon landing at a space centre in the US state of Florida.

The photo, titled “Apollo 16 Astronauts Train for Lunar Landing Mission”, is shown in a screenshot below and was published alongside the following caption: 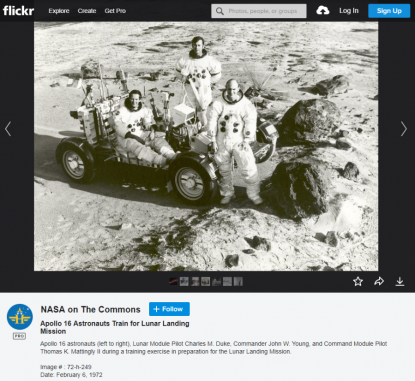 Metadata provided by Flickr lists the creator as Kennedy Space Center, which is located on Merritt Island, Florida.

Below is a screenshot comparison of the photo in the misleading post (L) and the NASA image (R):

This NASA newsletter states the Apollo 16 crew landed on the Moon on April 20, 1972, more than two months after the photograph was taken.

The space agency has published images from the mission here.

Here is an ongoing “moon hoax” Reddit thread. Memes about moon-landing denials have circulated on Facebook -- here for example on the Fake Nasa page, and here on a page called The Great Moon Landing Hoax.

News reports have helped debunk the conspiracy theories; AFP reported here on “how conspiracy theories followed man to the Moon”, National Geographic wrote an article titled “THE MOON LANDING WAS NOT A HOAX”, and a film expert said “Moon landings footage would have been impossible to fake”.