An image showing two bloodied boxers has been shared hundreds of times on Facebook alongside a claim it shows fighters Andy Bowen and Jack Burke after participating in “the longest boxing fight in history” in 1893. The claim is false; the image in fact shows boxers Dick Hyland and Ray Campbell after a fight in 1913.

The image was shared by a New Zealand-based Facebook user here on September 18, 2020. The post has been shared more than 150 times. 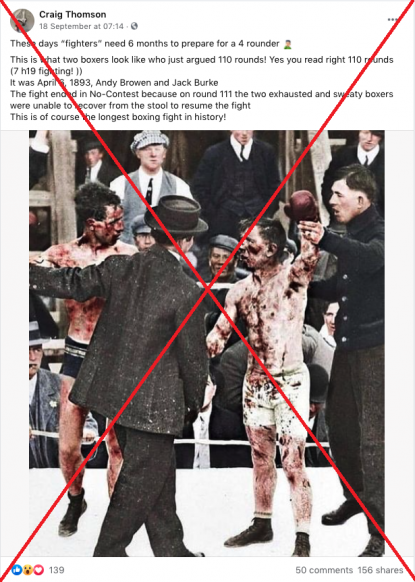 The post's caption reads: “This is what two boxers look like who just argued 110 rounds! Yes you read right 110 rounds.

“It was April 6, 1893, Andy Browen and Jack Burke. The fight ended in No-Contest because on round 111 the two exhausted and sweaty boxers were unable to recover from the stool to resume the fight.”

The caption goes on to claim the fight was “the longest boxing fight in history.”

The image was also shared alongside a similar claim hundreds of times on Facebook here, here, here and here.

A reverse image search found this black-and-white version of the photo featured in the post published in the City of Vancouver Archives.

According to the archive, the photo shows a “boxing match between Ray Campbell and Dick Hyland” on May 3, 1913 — not in 1893 as claimed in the false Facebook posts.

“Ray Campbell is listed as the official winner of this fight. It appears that Campbell is the fighter on the left and Hyland is on the right,” the archival description reads.

Major Matthew James Skitt is listed as having taken both the photos. Skitt was born in North Wales, but emigrated to Vancouver in 1898 where he eventually became the city’s archivist, according to the City of Vancouver Archives' website.

The photo appears to have been colourised by a Reddit user and posted to the platform here in 2013.

Another report on the Hyland vs. Campbell fight in Vancouver can be seen here in the May 4, 1913 edition of The San Francisco Call, a former newspaper in the US state of California. 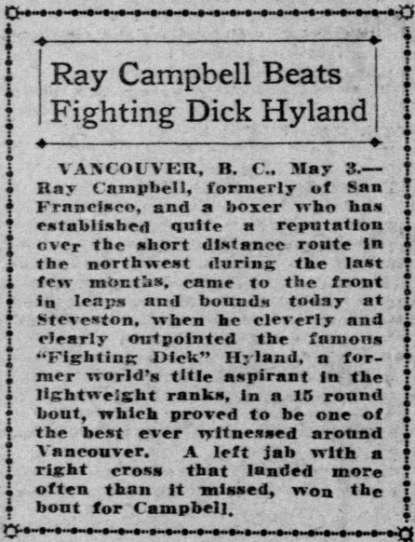 A screenshot of the article detailing the encounter between Campbell and Hyland in the San Francisco Caller, taken September 23, 2020.

The 1893 boxing match between Andy Bowen and Jack Burke was documented by historian Dr Randy Roberts in a 2015 article for Ring Magazine titled “Fighting to the Finish”.

According to Dr Roberts, the fight became the longest “gloved contest in history” after it entered the 101st round. It surpassed a 100 round, six-hour 39-minute match held in San Francisco in 1890 and a “six-hour, 15-minute match that had taken place in Australia”, he wrote.