A picture of soldiers walking on a dusty road has been shared in several Facebook posts claiming the photo shows the recent capture of thousands of Tigray rebels attempting to enter Ethiopia through the Sudanese border. However, the claim is false. The photograph was taken in 2000 and is unrelated to the conflict in Ethiopia’s northern Tigray region. In addition, an army spokesman told AFP Fact Check that no such arrests were made at the border.

The post, archived here, was published on Facebook on August 11, 2021, and has been shared thousands of times since.

The post’s translated caption reads, in part: "Yesterday, around 5AM (...) 1750 youth from the Samri group attempted to infiltrate the country through the Sudanese border". 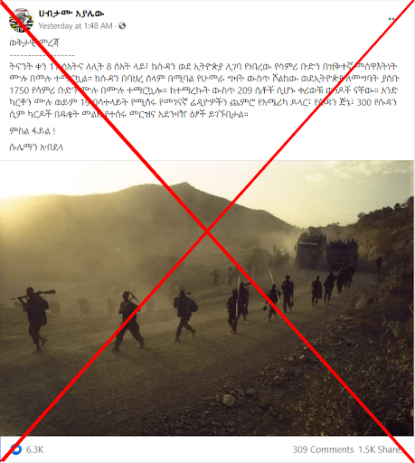 Screenshot of the false claim on Facebook, taken on August 12, 2021

The Ethiopian Human Rights Commission, a government-affiliated body, accused the Samri group of carrying out a massacre in Mai-Kadra, Tigray, in early November 2020.

The massacre was revealed by rights group Amnesty International, which used photo and video analysis, as well as interviews with witnesses who said retreating forces loyal to the Tigray People's Liberation Front (TPLF) and the Samri youth group were responsible for killing ethnic Amhara residents of the town. AFP also reported on the massacre. 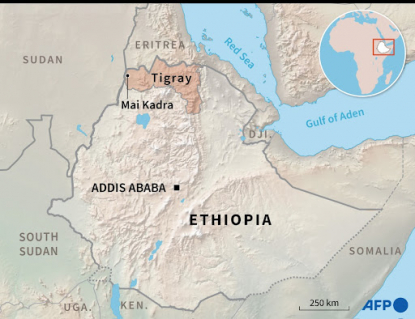 The post further claims that among the captured rebels, 209 were women, and that the group was carrying "a box containing 19 satellite radios, US dollars, Sudanese gin, 300 Sudanese SIM cards and anesthetic drugs in powder form".

The same claim has been shared in several other Facebook posts, including here, here, here and here.

However, the claim that this image shows members of the Samri group who were arrested while attempting to enter the country is false.

By running a reverse image search, AFP Fact Check found that the picture has been online since at least December 4, 2009. 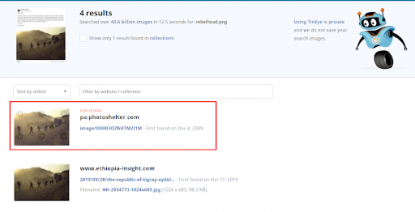 Screenshot of the search result on TinEye, taken on August 8, 2021

The first link takes you to the PhotoShelter website -- a platform that sells photo archives -- where they provide more information on the picture.

The image was taken by Petterik Wiggers, who has been working as a photographer and cameraman in Africa for more than 20 years.

According to the caption, the image was taken in Ethiopia in 2000 and shows troops involved in the long-running border conflict with neighbouring Eritrea.

Wiggers took another photo of the same scene, which is hosted on the Panos photo agency website. It shows a closer shot of the trucks loaded with soldiers.

AFP Fact Check already debunked another false claim that used this same image back in November 2020. At the time, Wiggers confirmed to AFP Fact Check that the photo was taken during the Ethiopian-Eritrean conflict and that it had “nothing to do with what is going on in Tigray right now”.

Army spokesman Colonel Getnet Adane told AFP Fact Check that no recent arrests were made at the Sudanese border and that claims that members of the Samri group attempted to sneak into the country are false.

“These are only rumours and if arrests were made, the government would have officially announced it,” he said.

While the Facebook posts claim that “thousands” of rebels were recently arrested on the Ethiopia-Sudan border, this was not reported in any local or foreign media.