This image of a newspaper front page has been doctored

A purported image of a daily newspaper in Northern Ireland has been shared hundreds of times on Facebook and Twitter alongside a claim that it shows a front page story about an Indian Muslim leader donating to the Indian Prime Minister’s novel coronavirus relief fund. The claim is false; the image has been doctored to include the fabricated story; there are no credible media reports that the Muslim leader cited in the misleading posts made any donation to the fund.

The image was published on Facebook here on April 6, 2020.

The post’s Hindi caption translates to English as: “Maulana Saad donated 10-million rupees in PM relief fund on March 28. When asked why did he not tell this the people, he replied: ‘Islam does not permit to show off charity.” 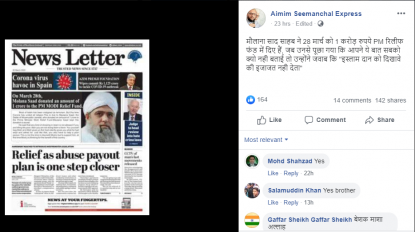 The News Letter is a daily newspaper in Northern Ireland.

Maulana Saad is a leader of Tablighi Jamaat, an Islamic revivalist movement that urges Muslims to practice the faith as it was during the life of Prophet Mohammed.

In March 2020, police launched an investigation after Tablighi Jamaat held a religious gathering in Delhi that was later identified as a major novel coronavirus hotspot. At least 10 attendees died after contracting the virus, AFP reported.

Some of the other posts include superimposed text over the purported News Letter front page that reads: “The good one that has been blamed has donated 10-million rupees into the PM’s relief fund on March 29, 2020.”

But the purported front page has been digitally manipulated.

A reverse image search found the report about Saad was digitally imposed over an image of an authentic a News Letter front page from June 6, 2019. The image of the real newspaper was published here by the BBC.

Below is a screenshot comparison of the image in misleading Facebook post (L) and the News Letter's June 6, 2019 front page published by the BBC (R): 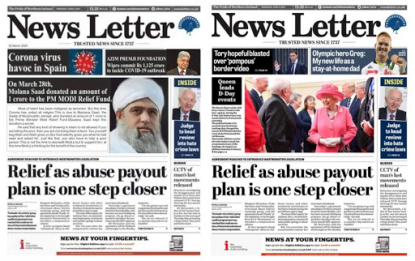 The News Letter’s archives show that the newspaper did not publish any story on Saad on June 6, 2019. A general search on the News Letter’s website for Maulana Saad also yielded no results.

The News Letter did not respond to requests for comment from AFP.

There are also no credible media reports that Saad made a donation to the government’s novel coronavirus relief fund.