An image has been shared repeatedly in multiple Facebook and Twitter posts alongside a claim it shows a UK billboard displaying a message from Queen Elizabeth II thanking Indian Prime Minister Narendra Modi for providing Britain with Covid-19 vaccines. The claim is false: the image has been digitally manipulated to include a fabricated quote from the Queen, who has not made any such statement as of March 30, 2021.

The image was published here on Facebook on August 2, 2020.

The post’s Hindi-language text and caption translates to English as: “UK Queen Elizabeth thanked PM Modi for providing Covid-19 vaccines in a message put up on a billboard in London. This is a proud moment for our country who was colonised by the same Britain for over 200 years and are now asking for help, thanks Modi.”

“Thank you PM Modi for sending us Covid-19 vaccines, you are a good boy,” reads the text on the billboard, accompanied by the photo of Queen Elizabeth II. 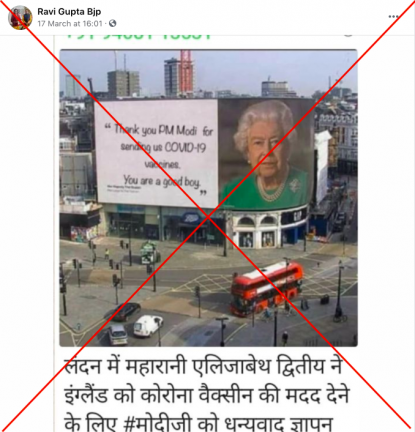 The image was also shared here and here on Twitter and on Facebook here and here by members of India’s ruling Bharatiya Janata Party alongside a similar claim.

The claim, however, is false. The image has been digitally manipulated to include a fabricated quote from Britain's Queen Elizabeth.

A reverse image search on Google found the same photo template here on a satirical website.

“Queen Elizabeth On A Billboard is an exploitable image of Queen Elizabeth with a message on a billboard in Piccadilly Circus. The image is typically edited by altering the text with an argument or a controversial opinion akin to presentation edits. The images became popular in April 2020 during the coronavirus pandemic,” the website’s introduction reads.

Below is a screenshot of the template on the satirical website Know Your Meme:

The original photo of the billboard at Piccadilly Circus in London was published here on Twitter by the British Broadcasting Corporation (BBC) in April 2020.

AFP photographer Glyn Kirk captured the billboard in London from a different angle. His image was published here on AFP's website on April 18, 2020. 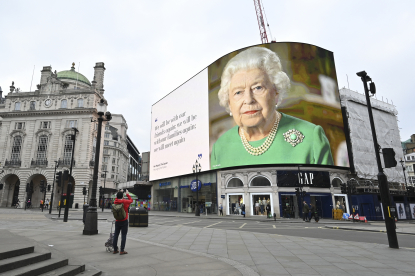 An image of Britain's Queen Elizabeth II with a message of hope from her special address to the nation is seen on the giant billboard in Piccadilly Square, central London during the coronavirus pandemic. (AFP / Glyn Kirk)

“A still image of Britain's Queen Elizabeth II with a message of hope from her special address to the nation is seen on the giant billboard in Piccadilly Square, central London on April 18, 2020 during the coronavirus pandemic. The number of people in Britain who have died in hospital from coronavirus has risen by 888 to 15,464, according to daily health ministry figures on Saturday. Glyn KIRK / AFP,” reads the photo caption.

A large proportion of the UK's AstraZeneca Covid-19 vaccines have been produced by the Serum Institute of India, the world's biggest vaccine maker, AFP reported on March 20, 2021.

India provided the UK with five million vaccine doses on March 5, 2021, according to the Indian Ministry of External Affairs official website.

Queen Elizabeth II, however, has not made any public statement thanking Modi for providing vaccines to India. No such statement has been published here on the Royal Family's official website nor in any media reports as of March 30, 2021.