An image purporting to show Indian activist Anna Hazare joining the ruling Bharatiya Janata Party (BJP) has been widely shared on Facebook and Twitter. The image, however, has been doctored to add Hazare’s face on the body of another politician who was photographed with the BJP's leader.

The tweet appears to have been published by an account belonging to Indian anti-corruption activist Anna Hazare. 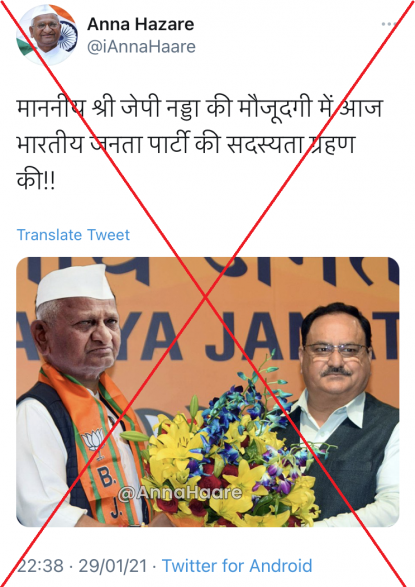 The photo circulated online after Hazare called off a hunger strike planned in support of Indian farmers protesting against agriculture reforms, after the government met some of his demands, the Times of India reported.

Social media posts (here, here and here) shared the image purportedly showing Hazare alongside the BJP leader, suggesting he had joined the party.

A reverse image search also found the photo has been doctored to add Hazare's face in the image.

A video of the now-BJP politician, Jyotiraditya Scindia, meeting with Nadda was published by The Times of India on March 11, 2020.

Below is a screenshot comparison of the doctored image (L) and a screenshot from The Times of India’s video (R):

Corresponding photos of the meeting between Scindia and Nadda were also published in March 2020 by several major Indian media outlets; for example here, here and here.

AFP found no credible news reports that Hazare has joined the BJP as of February 11, 2021.