Reports on social media in various African countries in English, French and Arabic show an emaciated man who was allegedly found in an underground prison after being jailed by ousted Sudanese president Omar al-Bashir. However, the picture is actually of a Kenyan man and was taken by a BBC journalist covering a hunger crisis in northern Kenya in March.

One of the false posts, shared on The People's News Africa  Facebook page placed the picture of the emaciated man alongside a picture of a man dressed in military regalia.

According to the caption, the two pictures show the same person, Colonel Awad Ibn Awuf.

“Breaking News: Colonel Awad Ibn Awuf, former Defence Minister of Sudan, jailed in 1995 by the ousted President Omar al-Bashir and declared dead in a plane crash in 2008 has been discovered alive in an underground prison in a Mosque. African needs self love more than anything!” the caption reads.

The post has since been shared more than 1000 times and attracted over 700 comments and reactions. 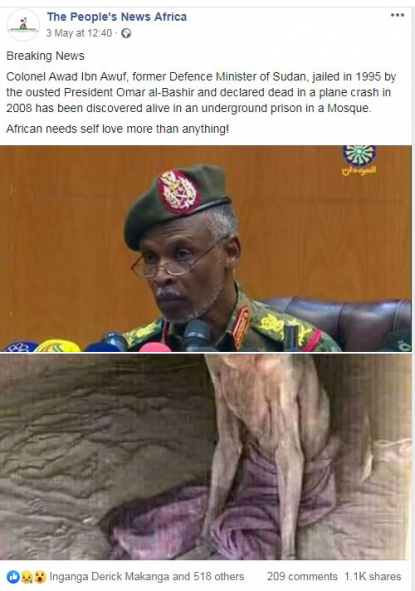 Screenshot taken on May 6, 2019 of Facebook post claiming to show emaciated man who was allegedly found in an underground prison after being jailed by ousted president Omar al-Bashir

However, Sudanese General Awad Ibn Ouf was not declared dead in a plane crash in 2008 -- he is the man who announced the overthrow of Bashir in April 2019 following months of protests in Khartoum. He briefly became chief of the military council that took over, before stepping down.

He and two other military heads also resigned, as reported by AFP here.

Other posts, including this one shared on a private group, claimed the emaciated man was “Colonel Ibrahim Chamsadine who was Minister of State in Charge of the Defense in Bashir's government”.

A number of articles, including here and here,  also published that version.

Colonel Ibrahim Shamseddine died in April 2001 in a plane crash that killed several of Sudan’s military leaders, according to a news article published here.

Another post, with over 400 shares, said the man was “Bashir’s political prisoner”. 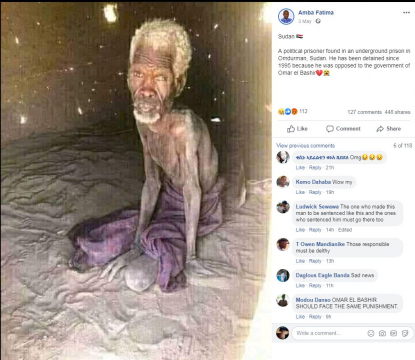 The visibly malnourished man is, in fact, a Kenyan man whose image was captured by BBC journalist Roncliffe Odit in March this year, during a drought in Turkana, northern Kenya.

Odit responded to one of the false posts stating: “I personally took this photo in Turkana Kenya”

I personally took this photo in Turkana Kenya #FakeNews https://t.co/XQPIpoRVA6

Sudan’s National Intelligence and Security Service announced the release of all political prisoners across the country, the state news agency SUNA reported in April.

Sudan has been rocked by months of nationwide protests that initially erupted after the price of bread tripled, before targeting Bashir's 30-year rule.

Sudan's new military rulers and leaders of the protest movement have held several rounds of talks on the composition of a new ruling council, but they have failed to make headway.