An image has been shared hundreds of times on Facebook in Ethiopia alongside a claim that it shows a real mountain cliff shaped like an elephant. But this is false: AFP Fact Check found that the image was digitally created by Polish artist Mirekis.

The image shows a mountain cliff in the shape of an elephant overlooking a snowy valley.

However, the image does not show a real landscape. It was digitally created by Mirekis, a Polish artist who combined three images to create the artwork.

The composite comes from a series of images called "Over the precipice", initially posted on Mirekis’s Facebook page on January 18, 2018.

“The series is still missing spring and fall,” the post’s Polish caption reads.

Mirekis shared the image a few days later on Instagram as well as on his 500px page, a photo-sharing platform.

The composite was created by layering three different images.

The original image that can be seen in the foreground of Mirekis’s work was uploaded on Wikimedia Commons by a user called “Giacomozanni” in April 2010. The image shows a mountain in the north-east of Italy where the Malatesta Fortress of Verucchio sits.

Noticeable details stand out in the foreground of both images such as the trees and bushes.

Image highlighting similarities between the original picture (right) and the composite

The other two images are composed of a picture of an elephant superimposed on an image of the Creux du Van, a natural rocky cirque located in east Switzerland near the French border. 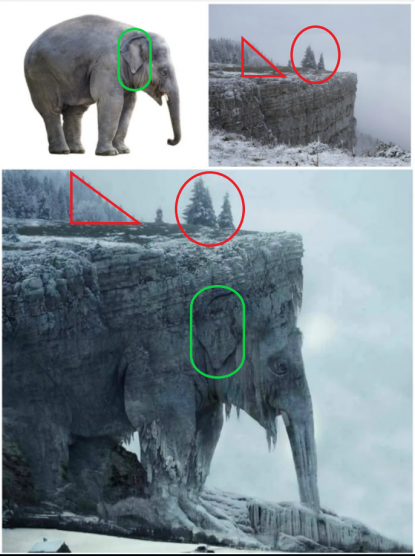 Image highlighting similarities between the original pictures (top) and the composite

Mirekis confirmed to AFP Fact Check that the photo in the misleading Facebook showed his artwork. The claim had already been debunked by Snopes in January 2018.

While Mirekis’s work was digitally altered and created as a form of art, there is an actual “Elephant Rock” in the cliffs of the island Heimaey in Iceland. 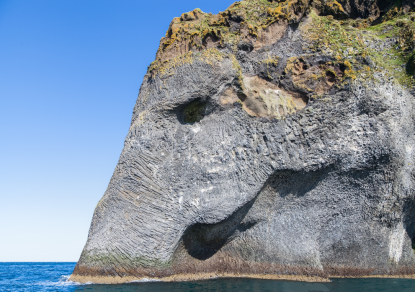 Image from Wiki Commons of “Elephant Rock” in Iceland