This clip shows the arrest of suspects in the murder of Haiti’s president, not of French soldiers

A video of hooded uniformed men carrying rifles and dragging handcuffed men through a door has been viewed thousands of times in a Facebook post purporting to show French soldiers detained in Mali. But the claim is false: the clip features the arrest of suspects in connection with the assassination of Haitian President Jovenel Moïse in July 2021.

The was shared in this Facebook post with the caption “France soldier arrested in Mali”. It has been viewed more than 8,000 times and shared nearly 500 times since being published on January 13, 2022.

The post surfaced amid tensions between Bamako and Paris over the presence of French troops in Mali and the controversial deployment of Russian mercenaries.

Mali is the epicentre of a jihadist insurgency, which launched in the north of the West African country in 2012 and has since spread to neighbouring Niger and Burkina Faso.

France currently has roughly 5,000 troops in the region to help fight the Islamist threat, although the country plans to lower that number by next year.

Reports emerged in late 2021 that Russian mercenaries working for the controversial Wagner group had deployed in Mali, sparking tensions with Paris, as AFP reported.

The strained relationship was exacerbated by France’s backing of sanctions against Mali over delayed elections.

While the political situation in Mali has been wrapped up in misinformation (see AFP debunks here, here and here), the video is unrelated to the events.

A reverse image search of keyframes retrieved from video verification tool INVID WeVerify located the same clip on pro-Kremlin Russian news site Mash, published on July 10, 2021. The caption of the video translates to “The assassination of the President of Haiti was organized by ‘foreigner Mike’”.

The caption refers to a claim made by one of the Americans arrested in the investigation of Moïse's murder, who said that the assassination was orchestrated by a "foreigner Mike" who "spoke Spanish and English", according to an article in the New York Times in July 2021.

Further searches located the same video in this report by Colombian news outlet Agencia Periodismo Investigativo. The article, whose title translates to  "Arrest of Colombian soldiers over the assassination of Haiti’s president”, was published on July 9, 2021. 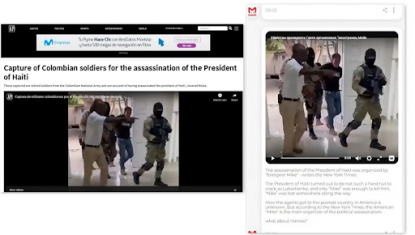 The logo of the Haitian national police can be spotted on the arms of some of the officers nine seconds into the clip. 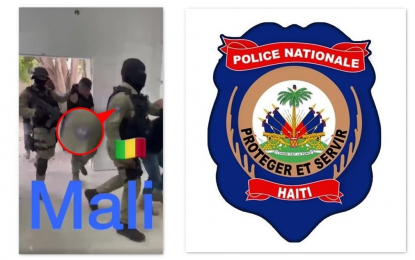 A screenshot showing the logo of Haitian National Police, taken on January 18, 2022

Last year, Haitian President Jovenel Moïse was murdered by unidentified individuals in his private residence in the capital Port-au-Prince.

The assassination, which is still under investigation, shocked the country and aggravated the political crisis. More than 40 people, including more than a dozen Colombians and some Americans of Haitian origin, have been arrested in connection with the assassination.

On January 15, 2022, Jamaican police arrested former Haitian lawmaker John Joel Joseph in connection with Moïse's killing.  Earlier this month, US authorities also charged a retired Colombian soldier in relation to the Haitian president's assassination. The Justice Department said 43-year-old Mario Palacios, along with others, "participated in a plot to kidnap or kill the Haitian President".