These images circulated before the 2022 Tonga volcanic eruption and tsunami

Images purporting to show ash-covered land in Tonga following a devastating volcanic eruption have been shared multiple times on social media. However, these posts are misleading: the photos all circulated in news reports before 2022, and were not taken in Tonga.

The images were posted to Twitter on January 17, 2022, two days after the underwater volcano erupted triggering a tsunami and covering the Tongan archipelago in ash, as reported by AFP.

"Pictures start to emerge on social media showing the aftermath of Tsunami and ashfall. Tonga we lift you up in Prayers, for speedy recovery. God be with you all," the tweet reads in part. 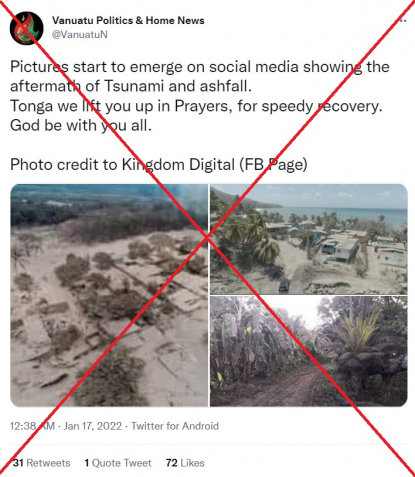 Other instances of the images also appeared on Facebook here, as well in French here.

However, the claim that the images show ash-covered landscapes in Tonga is misleading.

A Google reverse image search of the first photo in the misleading post, which appears to show trees and low buildings covered in ash, led AFP to the original photo published by the Associated Press news agency here, showing the impact of a volcanic eruption in Guatemala in June 2018.

The caption on the image reads: "Rescue workers search in El Rodeo, one of the hamlets in the disaster area near the Volcan de Fuego, or 'Volcano of Fire,' in Escuintla, Guatemala, Tuesday, June 5, 2018. The fiery volcanic eruption in south-central Guatemala killed scores as rescuers struggled to reach people where homes and roads were charred and blanketed with ash."

Below is a comparison between the image in the misleading post (left) and the Associated Press photo (right):

A reverse image search of the second image showing coastal houses covered in ash found the same picture was published in an article by British broadcaster Sky News, which features drone footage of the aftermath of a volcanic eruption on the Caribbean island of Saint Vincent in April 2021.

Below is comparison between the image in the misleading post (left) and the drone image used in the Sky News article (right):

The image is a still from the beginning of a the drone video included in the Sky News report. The video is credited to the United Nations in Barbados and the Eastern Caribbean.

Footage of the ash-covered houses can also been seen in this YouTube video uploaded by the UN organisation at 0:25.

Another reverse image search of the third picture showing what appears to be trees covered in ash led to this article published on April 17, 2018 by UK news site Express.co.uk about a volcanic eruption on the island of Ambae in Vanuatu.

The caption on the photo reads: "Ambae volcano ERUPTION: A thick layer of ash covers the island".

The image is credited to Wilfred Woodrow, a Facebook user who also posted the same image in a post on April 10, 2018 here relating to the Ambae eruption.

Below is a comparison between the image in the misleading post (left) and the photo in the Express article (right):