A graphic video that appears to show a man with smoke coming out of his face has circulated in social media posts alongside a claim the man was "burned inside out by 5G radiation and graphene in vaccines". The posts further claim the incident was filmed in Israel which leads in Covid-19 vaccinations worldwide. These posts are false; the video has circulated in reports about protesters sprayed with tear gas in Iraq before the coronavirus pandemic; experts told AFP that claims linking Covid-19 vaccines to 5G or graphene are inaccurate.

The video was shared here on Facebook on December 29. The video shows a man who appears to emit smoke from his eyes and ears. The video's caption, written in both Korean and English, alleges vaccination is the culprit.

The post reads in part: "During a demonstration against the Israeli government. One of the protesters started screaming, spewing smoke from his eyes, mouth, nose and ears. His brain burned from the inside out.

"There is another video circulating in which two men smoke from their heads. Both men are known to have been vaccinated. It seems that something inside their head was short-circuited, perhaps caused by microwaves or 5G electromagnetic radiation.

"What is known is that people who have received the death 'vaccine' are subject to internal damage caused by the interaction of electromagnetic waves and heavy metals, graphene, etc."

One comment to the post reads: "This terrible thing happened in Israel, the leading country in vaccination".

Graphene is an artificially produced and electrically conductive form of elemental carbon that is considered one of the lightest and strongest materials to conduct electricity.

Israel's response to the coronavirus pandemic has been closely-watched worldwide, notably for its rapid vaccine rollout and early decision to offer booster shots before there was broad scientific support for a third dose, AFP reported.

The video shared in the posts is unrelated to the pandemic. It has circulated in news reports since at least October 2019, two months before the coronavirus was first detected in Wuhan, China.

A Google reverse image search of keyframes from the video found it was posted here on Twitter on October 27, 2019 by the Iraqi news organisation The Baghdad Post.

"The moment when a tear gas canister is burning the eye of a protester", the report reads. The post includes the hashtags "#Iraq", "#iraqProtests" and "#Baghdadprotests". 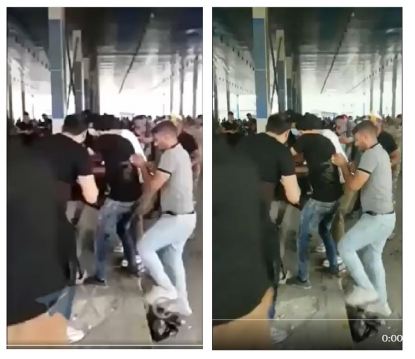 The video was also posted here on Twitter on October 26, 2019 by Iraqi political analyst Sajad Jiyad. And it was included in reports aired by US broadcasters NBC and Newsy the following month.

In October 2019, thousands of Iraqis took to the streets of Baghdad and other cities in southern Iraq to protest corruption, unemployment, poor public services and foreign interference.

The demonstrations left nearly 600 dead and led to the resignation of then Prime Minister Adil Abdul-Mahdi. AFP reported on the protests here.

AFP has also debunked similar false posts that shared the video in Spanish.

Experts told AFP that the approved Covid-19 vaccines don't have graphene as an ingredient, refuting false claims by many anti-vaccination groups and individuals.

"None of the vaccines approved for use by the World Health Organization or any other internationally recognised regulatory bodies contains graphite, graphene or its derivative, graphene oxide," Marc Mendelson, a professor of infectious diseases at the Groote Schuur Hospital in South Africa, told AFP.

Throughout the pandemic, misinformation also swirled online making false connections between 5G and the coronavirus or its vaccines.

"There are not any adverse health effects caused by exposure to 5G," Rodney Croft, a professor at the University of Wollongong in Australia, explained.