Skip to main content
Children standing beneath a clothes drying line look out the balcony in a damaged building in the city of Raqa in east central Syria on February 26, 2021. ( AFP / Delil SOULEIMAN)

Dramatic footage of a distressed man crying next to the body of a dead girl has circulated in social media posts worldwide in January 2022 alongside a claim the child died after receiving a Covid-19 vaccine. However, the journalist who filmed the footage said it shows a child killed by a bomb in Syria in October 2021. A spokesperson for UNICEF told AFP that no children in Syria had received Covid-19 vaccines as of January 11, 2022.

"Nuremberg 2.0. An 11-year-old child died after being vaccinated", reads a Korean-language Facebook post that shared the video on January 6.

The Nuremberg Code is a set of research ethics principles for human experimentation established after World War II.

Throughout the pandemic, individuals and groups opposed to Covid vaccines have misleadingly invoked the Nuremberg Code, AFP reported here, here and here. 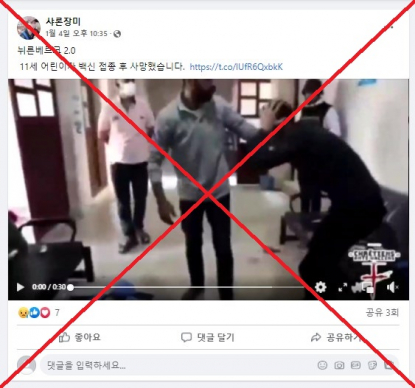 The video was shared in similar posts in English, Korean, Polish and Portuguese.

"The corona pandemic is a mass human slaughter disguised as a medical response", one social media user commented.

But the video had been shared in a misleading context.

A reverse search found the original footage was posted October 22 on the Twitter account of Ali Haj Suleiman, a photographer covering the conflict in Syria. The post states the video was filmed in Idlib, northwest Syria.

Suleiman rejected claims that the video showed a child who died after receiving a Covid vaccine in a Twitter post on January 6.

"This video attached below, I filmed in Ariha-Idlib,is circulated on social media in Brazil as a child died after receiving CV19 vaccine in different areas around world", he wrote.

This video attached below, I filmed in Ariha-Idlib,is circulated on social media in Brazil as a child died after receiving CV19 vaccine in different areas around world. It was of a girl who was killed on20/10/2021 as a result of the bombing caused by the Syrian regime war. https://t.co/gBoaFTkUiypic.twitter.com/oQ6kzjHV3Y

AFP reported on the incident here.

"Shelling by the Syrian army killed eight people, five of them civilians, Wednesday in the northwestern region of Idlib controlled by jihadist-led rebels, a war monitor reported", the report reads.

"Rockets struck a busy area of the town of Ariha, the Syrian Observatory for Human Rights said, adding that at least two children were among those killed."

"The shelling, which hit the war-ravaged town at a time when children were heading to school, also wounded at least 26 people."

The United Nations and Human Rights Watch also published reports on the attack.

"Children in Syria have not received vaccines against Covid-19", Juliette S. Touma, spokeswoman for UNICEF which supports vaccine supply in Syria, told AFP on January 11, 2022.

A UNICEF report at the end of October 2021 -- after the original footage was posted online -- states only people aged 30 and over had been vaccinated at the time.

"The very low vaccination rates across Syria are driven by the low availability of the vaccine", the report states.