Old image shows Mo Salah signing for Liverpool Football Club in 2017, not a new contract in 2021

Posts on  Facebook and Twitter have shared a picture of Egyptian and Liverpool FC forward Mohamed Salah alongside claims that he has signed a new contract with the English club. This is misleading; there is no evidence yet of Salah signing a new deal with Liverpool. The image being shared was taken in 2017 when he joined the club from AS Roma.

An image of Salah holding a pen and smiling at the cameras was shared here on Facebook, alongside the caption: “He has signed a new contract”. The post was published on December 26, 2021. 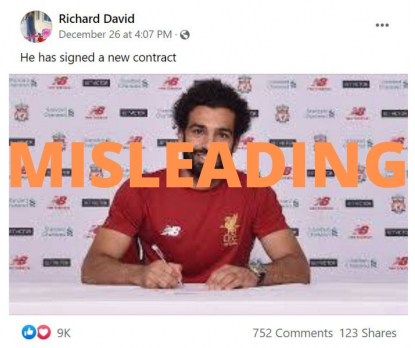 AFP Fact Check traced the claim to this tweet published a day earlier by a supporters’ club Twitter account in Turkey. The tweet claimed Salah had extended his Liverpool contract and that an official announcement was expected that evening. 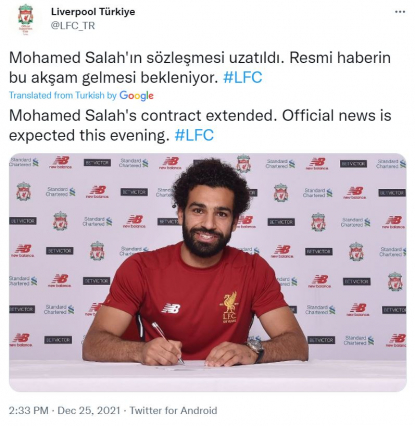 A Google reverse image search shows that the image was originally taken in June 2017 when Salah joined Liverpool from Italian club Roma. The Getty Images picture was taken by Andrew Powell for Liverpool FC and captioned: “Liverpool announce signing of Mohamed Salah".

In the picture, Salah is wearing a New Balance (NB) kit. NB sponsored Liverpool until 2020. They were then replaced by Nike.

AFP reported the signing, which was estimated to be €39 million ($43.5 million). In 2018, Salah signed a new five-year contract with Liverpool, after he was named the best player in the Premier League by the Football Writers’ Association and Professional Footballers’ Association (PFA).

There have been rumours in the media that French team Paris Saint-Germain (PSG) are interested in signing Salah. This has led Liverpool fans to call on the club’s management to sign Salah to a new deal.

Liverpool manager Jurgen Klopp has said his side is in “good conversations" with Salah to extend his stay with the Reds.

Salah has 18 months left on his current contract.